Editor's note: The markets and our offices will be closed on Monday in observance of Memorial Day. Your next issue of DailyWealth will publish on Tuesday, after the Weekend Edition. We look forward to rejoining you soon.

If you learn from your mistakes, then the global economic crisis in 2008 and 2009 made you a much smarter person. But hopefully your mistake wasn't as expensive as mine...

I lost $50 million of other people's money.

In early 2008, I was the portfolio manager of a hedge fund that invested mostly in Russian stocks (back when I was a cheerleader of Russian President Vladimir Putin). Within a few months of my taking over the job, the price of oil – the heart, lungs, and liver of the Russian economy – hit an all-time high.

The fund was climbing, and I was feeling smart. But soon, the economic crisis swept through world markets, and the bottom fell out of commodities prices...

My fund outperformed the market. But being down around 60% (and "beating the market"), while losing $50 million, is not winning by any worthwhile definition... And it certainly wasn't for the investors in my fund.

Mind you, $50 million is pocket change by hedge-fund standards. In April of last year, Archegos Capital Management lost around $20 billion in two days. In January 2021, Melvin Capital Management lost $6.8 billion within a month at the hands of meme-stock driven kamikaze capital. And then there was the granddaddy of them all, the $65 billion lost by "financial serial killer" Bernie Madoff.

But it's one thing to read about these stories... It's a lot different when it's you.

Here are some of the lessons I learned – that I'll carry with me forever – from my $50 million mistake...

Check your emotions at the door. Some of the worst decisions I made in the midst of collapsing markets were driven by adrenaline rather than reason.

Few split-second choices – except those to swerve to avoid hitting something large on the road – are good ones. If it's a smart thing to do, it will be a smart thing to do after you take a deep breath and count to 10... and then do it again.

FOMO is your enemy. Along the same lines, the fear of missing out ("FOMO") – what drives you to buy a stock after it's moved up 10% in two hours – is a terrible investment strategy. It's when your inner crazy says something along the lines of: "This is it – if I don't get in now, I'm going to miss the rally."

Instead... wait for the trend. You can miss the first 10% or 20% on the way up, which may be just a market head fake, and still make plenty of money on the upside.

Use and stick to stop losses. This is from an e-mail that I wrote my colleagues on February 24, 2008 (copied into a trading journal I was keeping at the time)...

Has the fund ever used stop losses? I don't mean automatic standing orders with brokers, which can very easily get you in trouble (particularly with illiquid shares) if you're whipsawed; rather, informal but solid stop losses (both from position initiation price, as well as from recent highs) that trigger a thorough reinvestigation of the investment case...

My tendency would be to cut loose stocks that are down, say, 15% [this would have been a tight stop-loss level], unless there is a compelling reason to continue to hold them. I think it would be helpful if we had a discipline to prevent losers from getting out of control – and from winners turning into losers.

It was a good idea... because after I wrote that, the market fell 76%. Unfortunately, it wasn't an idea that I practiced.

Remember that there's nothing wrong with cash. When markets are falling, the value of cash doesn't change. That's why it's so valuable in a crisis. You might regret missing out on gains later (see: "FOMO," above). But you'd regret losing money more.

This is an investor trait called loss aversion... when you hate losing more than you like winning. Cash will help you avoid losing. And it will help you win more later.

Ignore the news. When you're in the thick of things, every piece of news can feel like something momentous... Powell said what? The technicals did what? Russia is invading where?...

Day-to-day news mostly serves one purpose: to employ journalists. It should have no bearing on what you buy or sell. You should have a big-picture, long-term outlook that's guiding you – stick with it, and let it evolve over time.

Learn how to hedge. When you "hedge" your portfolio, it means you protect it against something changing that could hurt your returns. (A hedge fund, after all, is supposed to perform better than the market because it's protected on the downside.)

When I became a hedge-fund manager, I didn't know enough about hedging... which is like becoming a barber and only having a passing acquaintance with scissors and trimmers. And, well, that's partly how I lost $50 million.

Just because a lesson is learned the hard way doesn't mean you won't forget it. Even the best investors forget or ignore what they know is better for themselves and for their returns. But taking note of what you learn – I hope – might mean that your errors won't be as costly the next time.

Steve spent plenty of time in classrooms on his way to earning a PhD in finance. But he always wondered why his professors weren't making a killing on the market instead of teaching. That curiosity led to a crucial lesson... Get the full story in his two-part essay here and here.

"Many investors can't just cut their losses and move on," Dr. David "Doc" Eifrig writes. Novice traders tend to hold onto winning positions too long due to fear of missing out on gains. But the pros use this technique to profit without worrying about chasing higher returns... Read more here.

We love to highlight companies that “sell the basics.” These businesses sell the products folks use every day… like peanut butter, soda and tea, coffee, and detergent. And that means customers will come back on a regular basis to restock. Today’s company combines this with a budget-friendly approach…

Grocery Outlet (GO) is a $5 billion discount grocery chain. It buys excess inventory from well-known brands like Quaker Oats and Minute Maid, then sells those products at a lower price than most retailers. These are the basics people shop for week in and week out. And with inflation pushing prices higher today, folks are flocking to Grocery Outlet for bargain buys… Grocery Outlet posted net sales of $831 million in the first quarter, up nearly 11% year over year.

As you can see in today’s chart, GO shares are doing well lately. Year to date, they’re up more than 30%… And they recently hit a fresh 52-week high. As consumers look for ways to get their essentials for cheap, Grocery Outlet should benefit… 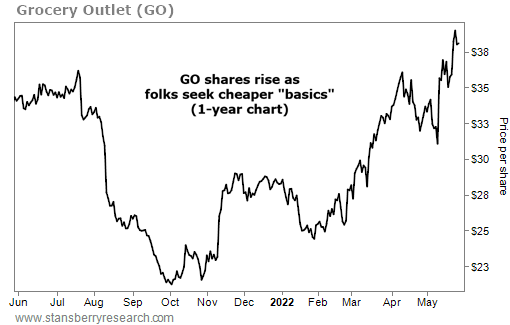