Wordle is the most recent gaming app to sweep the nation. Once a day, players get six chances to try and guess a five-letter word.

Josh Wardle (yes – the name of the app is a pun) launched Wordle in October with humble beginnings. It started as a gift to his wife. The game had a mere 90 daily active users ("DAUs") in November... Now, it has roughly 300,000 DAUs.

Wordle has taken off, with upward of 3 million total players around the world. It's easy to share your score and attempts with friends... It's competitive... And the limit of only playing once a day makes it addictive.

In fact, its popularity drew the New York Times to purchase it a few weeks ago for more than seven figures.

The New York Times has a repertoire of other word games, crossword puzzles, and paywalled articles as part of its subscription model. But considering the high cost paid for one simple game, many analysts wonder if the brand name was worth it.

It's hard to tell if the New York Times' shift to a subscription model is working – unless you can pull back the curtain on its true performance...

Company after company has switched from a one-time payments model to offering "sticky" subscription services.

While pioneered by Adobe (ADBE) and SalesForce (CRM), other businesses are taking up this Software as a Service ("SaaS") model to bring in recurring sales and supercharge returns.

The New York Times is doing the same. It has historically relied on advertising revenue, boosted by subscriptions as a smaller part of its business.

But now, it's working to drive up its subscriber count by adding value – such as word games – to pursue more of that SaaS business model.

Considering that the New York Times has been actively pursuing this strategy, it should have already started to see impressive returns...

Recently added segments like "Games" and "Cooking" each added about 1 million subscribers. So its purchase of Wordle shows promise.

But if you only look at the as-reported metrics, you'd never know it...

Returns appear to have been stagnant since 2016, sitting at just 5% return on assets ("ROA") for the past three years. Despite reaching millions more people, the New York Times' performance doesn't seem to be doing much. Take a look... 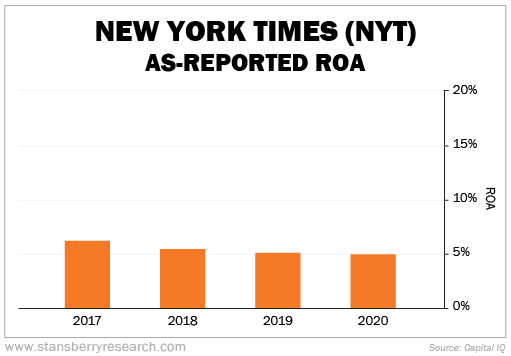 This lack of growth has left analysts wondering why the New York Times would make such a huge purchase for a simple word game.

Spending more than $1 million seems like a big gamble and a waste of money for a company that isn't doing anything extraordinary.

However, Uniform Accounting tells us why the New York Times purchased the Internet's latest phenomenon so quickly – and with such a high price tag...

Traditional accounting methods are rife with distortions. Our team at Altimetry uses Uniform Accounting to filter out those distortions and see what's really going on with a company's earnings. That way, we can see what the Wall Street analysts are missing. 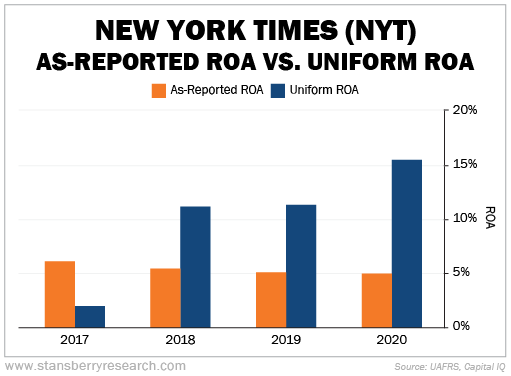 Pursuing this subscription model for news and puzzle games has made the New York Times an above-average company.

While analysts might be scratching their heads on why the New York Times would pay so much for Wordle, its subscription-based model of paying for games like this is turning the company around. Thanks to Uniform Accounting, we can see that clearly.

Editor's note: Digital technology companies like Facebook, DocuSign, Twitter, Shopify, and many others have fallen 40% or more. But Joel says the big money is headed somewhere new... to a part of the markets very few people are paying attention to. And that means the "digital revolution" as we know it is about to get steamrolled – by something MUCH bigger.

This opportunity is just now hitting an inflection point. All the details are in Joel's brand-new presentation... You can access it totally free of charge, right here.

Under conventional metrics, it's hard to explain how Amazon became a dominant player in e-commerce. But by stripping away the market distortions, Joel reveals why this giant continues to grow... Read more here: Amazon's Profitability Is an 'Iceberg' Under the Surface.

New York Times isn't the only company making "hidden" profits. This software leader is growing its reach with a new business model. And it's a lot more lucrative than traditional accounting suggests... Learn more here.

Market Notes
'SELLING THE BASICS' GIVES THIS COMPANY A BOOST

Regular readers know we love highlighting companies that sell everyday items, like bread and cleaning supplies. These businesses sell the products that we use on a daily basis… which means customers will keep coming back to restock their cupboards. Take today’s company, for example…

Hormel Foods (HRL) is a $30 billion food-processing company. It owns more than 50 brands worldwide, including well-known names such as Hormel Pepperoni, SKIPPY peanut butter, and SPAM. Its wide variety of foods makes it easy to buy for any occasion, whether you’re looking for party appetizers or on-the-go snacks. And that leads to consistent, growing revenues… In the most recent quarter, Hormel Foods saw record sales of $3 billion, up 24% year over year.

As you can see, HRL shares have climbed higher over the past five years. They’re up almost 50% over that period and recently hit a new 52-week high. It’s just more proof that selling the basics is a winning strategy…