You Shouldn't Worry About a Potential Market Pullback
By Chris Igou
Friday, March 5, 2021

That's an incredible gain in less than a year. And even more incredible, that run has happened without a single correction (a fall of 10% or more).

We've hardly seen stocks stop to take a breath since the March 2020 bottom. It has been a straight move higher, month after month.

That kind of uncontested bull run is creating worry in investors' minds. They assume a correction has to come... that we're due for it. And the bubble behavior we've seen recently looks like even more evidence that a fall is coming soon.

That mindset makes sense... Again, stocks have jumped 73% in less than a year without a 10% fall along the way. One's got to be just around the corner... right?

Maybe. But it's no sure thing.

To answer this question, I wanted to do my own digging. So I took a closer look at similar rallies to decide if today's bull market is as overstretched as many folks think.

In order to do that, I had to ask two questions...

To get the answers, I looked at every S&P 500 rally without a correction since 1950.

It turns out, there were 34 of these "unbroken" rallies in the past 70 years. But what you might not expect is that 10 of those each ran 70% or higher before seeing a 10% pullback.

Said another way, nearly a third of historical rallies were more dramatic than today's. And the most extreme ones made today's move look like nothing!

In total, six out of those 10 doubled before seeing a correction. Take a look...

That's seven years... with no correction at all. Amazing!

So where does today's rally fit in?

Well, we're nowhere near these kinds of multiyear moves yet. Today's move happens to fall right near the average over the past 70 years... which was a 61% gain.

Sure, we could see a pullback soon. It wouldn't be surprising. But we could also see today's rally go a lot further from here before hitting any kind of record. Stocks could double again, and this still wouldn't be the most extreme example in history!

That's what we could see this year... a continuation of the massive rally that has taken place. And that could happen alongside an eventual Melt Up peak in 2021. That doesn't mean the top will happen tomorrow, though.

Simply put, this is not the time to get twitchy fingers. It's time to stay long for now, while preparing for tough times ahead.

Nearly everyone is scared that the market is overdue for a correction. And the thing is, they're probably right. But if you zoom out and look at the bigger picture of the Melt Up, we could still see stocks hit astronomical levels from here... Get the full story here: We're Due for a Correction... So What?

When the market is consistently making new highs, bearish investors sound off. They think you should get ready for a major correction. But history tells us that stocks can continue going up from their current prices... Read more here: Why the 'Groundhog Day' Trap Could Ruin Your Investments.

Regular readers know that financial stocks are the “backbone” of America. They do well when folks are able to take out loans and save their money. That picture is improving now, with another round of stimulus checks on the way and vaccines rolling out. And recently, U.S. bond yields spiked… which means banks can charge more for loans. Today’s company is benefiting from these tailwinds…

HomeStreet (HMST) is a West Coast bank with $7.2 billion in assets. It has more than 1,000 employees and 67 offices, which help folks with mortgages and lending services, as well as insurance. And it’s going strong right now… HomeStreet reported net income of $27.6 million in the latest quarter, up from $11 million year over year. And it recently raised its dividend and announced the expansion of its share-repurchase program.

HMST shares are in a strong uptrend. They’re up more than 70% over the past year, recently hitting new all-time highs. And as the economy continues to reopen and folks get back on their feet, that trend should continue… 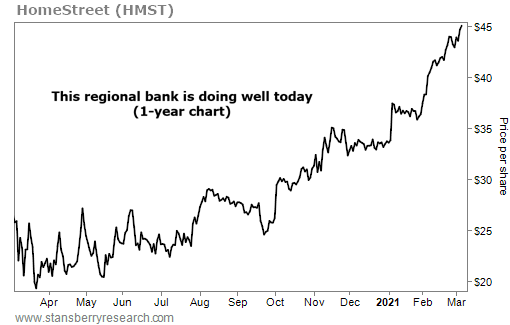