Editor's note: The government's latest stimulus efforts are set up to fuel another major asset boom – at least for now. But over time, they will have disastrous consequences for you and your wealth. In today's essay, adapted from a recent Stansberry's Investment Advisory special report, our founder Porter Stansberry explains why.

If you're planning to attend his online discussion today at 10 a.m. Eastern time, make sure you read this first...

That's a slogan that's gaining popularity among economists. It's music to the ears of politicians on both sides of the aisle. It gives them permission to continue their out-of-control spending...

Of course, we're talking about the national debt. The U.S. now owes $26 trillion and has another $153 trillion in unfunded liabilities. It's hard to imagine a number that big... A trillion dollars has 12 zeros.

In one sense, the economists are right. The debt doesn't matter – because it's never getting paid back. The government will continue to print more money to pay the interest for as long as it can get away with it.

The system of ever-expanding debt works great for politicians with election promises to fulfill, and for people and corporations on the receiving end of the dole.

But if you're reading this, chances are it doesn't work so well for you...

You see, the real price of ever-increasing debt is the reduced purchasing power of the U.S. dollar.

The real price of milk hasn't changed at all. It's just that the dollar has lost purchasing power with the ever-expanding supply of U.S. dollars. So it now takes more dollars to buy a gallon of milk.

This doesn't always play out in a straight line. There are periods of dollar scarcity in economic downturns. That's when debtors scramble for dollars to pay back debt – which increases the dollar's value temporarily.

But over the long term, the more the government goes into debt and increases the supply of dollars... the less the dollar is worth, and the lower its purchasing power.

The dirty secret behind "debt doesn't matter" is that it comes at a huge cost...

Besides being a medium of exchange, money's other primary function is that it's a measure and store of value. The true cost of a "debt doesn't matter" policy is that it erodes the dollar's "store of value" function.

This erosion accelerated in March 1968. That's when the government repealed, with almost no debate, the backing of 25% of every dollar by gold.

And in August 1971, President Nixon reneged on our promise to exchange gold for dollars to U.S. creditors. This allowed the U.S. government to print as much money as it needed – setting us up for the massive debt we have now.

Ever since then, you can think of the dollar as a bucket with a leak in it. That's why holding U.S. dollars over long periods makes no sense.

It forces savers to become investors. Now, the only way to preserve wealth over the long run is through holding assets like stocks, corporate bonds, real estate, and precious metals.

In theory, high debt levels should cause interest rates to rise. But not anymore... The Federal Reserve is willing to buy an unlimited amount of U.S. debt (by printing money) that can't be sold on the market. This keeps interest rates pegged at artificially low levels. But it's tremendously inflationary over the long term.

There's no turning back now. U.S. debt is now so great, the government can no longer pay the interest on the debt and its other obligations by collecting taxes.

That's why proponents of Modern Monetary Theory, or "MMT," are arguing for the Treasury to print dollars directly – eliminating the need to find buyers for its debt. They argue that the government should be able to print as much as it wants until we see full employment and inflation in the economy.

There's a reason MMT is getting a lot of press... People like free stuff. And politicians don't like their spending powers curtailed. So MMT has a good chance of being implemented.

But whether it's borrowing through the Fed or MMT, the federal government is free to print all the money it wants to pay government debt. So the U.S. government will never default outright.

Instead, we're looking at a slow-motion default through the reduced purchasing power of the U.S. dollar.

The value of a dollar isn't all that's at stake, either. And tomorrow, I'll explain why...

Editor's note: America is on the path to a monetary revolution... like many we've seen over history. But you can protect – and even grow – your wealth in today's precarious environment, if you understand what's coming. So make sure you watch Porter's online broadcast today, at 10 a.m. Eastern time, to hear all the details. You can sign up right here.

This year, the deceased received $1.4 billion in stimulus checks due to a simple error. And believe it or not, that's far from the only sign that the government needs to rethink its priorities... Get the full story here: The Danger of Trusting 'Fake Money.'

The stimulus we're seeing today could lead to huge problems down the road... But first, history says we'll likely see huge gains in stocks before the bottom falls out. To learn more, check out Steve's two-part series here and here.

Market Notes
A SAFE INVESTMENT IN AN UNCERTAIN ECONOMY

Longtime DailyWealth readers know utilities stocks can be some of the surest bets you can make. No matter what’s happening in the economy, folks still need to keep their lights on and their water running. Today’s company provides safe, clean water to customers…

American Water Works (AWK) is the largest publicly traded water utility company in the U.S. It provides drinking water, wastewater, and other services to more than 15 million people across 46 states. And while other companies have struggled during the pandemic, American Water’s business is strong… In its latest quarterly results, the company said its adjusted diluted earnings per share were $0.67, a 9.8% increase year over year. It also raised its quarterly dividend to $0.55 per share, marking the eighth year in a row its dividend has increased 10% or more.

As you can see, the utilities model is tried and true. AWK shares are up more than 210% including dividends over the past five years. No matter what happens in the economy, folks still need water… 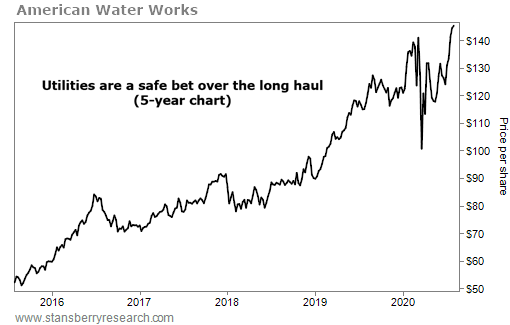 Inside Today's
DailyWealth Premium
How to make triple-digit gains as silver takes off...

When silver is relatively cheap compared to gold, like it is today, it tends to outperform in the following months and years. And this company will be a big winner as the metal soars to new heights…