An Income Opportunity With a Near-Perfect Win Rate
By Chris Igou
Tuesday, July 6, 2021

An 87% win rate is about as good as it gets in the investing world...

Heck, if you can make money on 60% of your trades, you'll do well in the markets. Profiting closer to 90% nearly guarantees long-term success.

It stacks the odds of making money strongly in your favor. And that's exactly the opportunity in one market right now.

This is an area of the market many investors overlook entirely. But right now, it's paying a 9% dividend and is positioned for solid profits over the next six months.

Commodities have soared in recent months. And that has sent the Alerian MLP Index on a tear.

The index recently rallied 10 days in a row. And history says we can expect more gains in the coming months.

Master limited partnerships ("MLPs") are a special type of company structure. They allow a company to avoid heavy taxation. In exchange, MLPs pass on the majority of their earnings to investors via dividends.

That's normally what's attractive about MLPs... And it's attractive today as well. The easy-to-own exchange-traded fund that tracks the sector pays a 9% dividend as I write.

Today's setup adds a little extra spice to the opportunity too, though...

Longtime readers know that consecutive up-days signal a major breakout. And they can mean an acceleration of the trend. That's true in this case, too.

As I said, the Alerian MLP Index recently rallied 10 days in a row. Take a look... 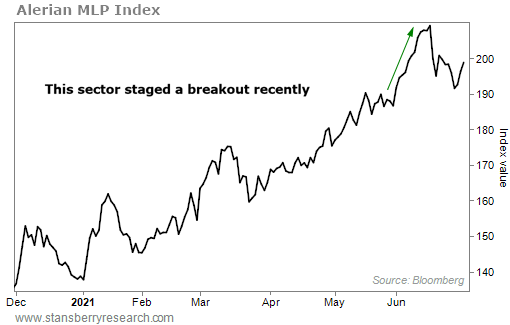 This sector is in a strong uptrend. And we could see more outperformance over the next six months as a result.

Since 1997, similar setups have happened a handful of times. And the majority led to strong outperformance over a simple buy-and-hold strategy. Check it out...

This sector hasn't been a stellar price performer in the past few decades. Remember, MLPs are normally income investments. But buying after today's breakout could lead to solid short-term returns.

Similar cases have led to 3% gains in three months and a 7% gain over the next six months. That's much better than the 1% return you'd get with a buy-and-hold strategy.

The Alerian MLP Fund (AMLP) tracks this sector. And again, it's paying a 9% dividend today. So not only is the sector positioned to keep rising, but you could earn solid dividends too.

In short, this sector is breaking out. And buying after a setup like today's has led to gains 87% of the time.

This isn't a hot, game-changing investment opportunity. But it's a good one. And you can easily take advantage of it through shares of AMLP.

When too many investors pile up on one side of a trade, the opposite is likely to happen. And right now, folks are rushing into "safe haven" assets. But following the crowd could mean missing out on further upside in this area of the market... Read more here: Don't Rush Into This Popular Bet Today.

Investors are ignoring this "boring" sector of the market. Compared with the broader market, it's grossly undervalued. And based on history, we could see a major rally from here... Get the full story: This U.S. Sector Is Dirt-Cheap Compared With the Entire Market.