If you know what insiders are doing, you can spot major trends ahead of the crowd.

My "Chaikin Money Flow" indicator does just that. It's like having a seat inside a private board meeting, as I explained yesterday in DailyWealth.

It focuses on what I call "accumulation." And it's how I spotted the opportunity in GameStop (GME) before the folks on Internet message-board platform Reddit.

If you had followed my system, you could have pocketed roughly 800% gains.

By now, everyone knows the incredible story of the video-game retailer...

In short, a very persuasive analyst pitched a failing stock to a group of interested folks on Reddit. The failing stock, GameStop, was highly shorted by a bunch of Wall Street's biggest names. And as people bought in, a "short squeeze" of epic proportions ensued.

That's the prevailing narrative at least. While it's not wrong... it's not entirely right either.

You see, using my Chaikin Money Flow indicator and the Power Gauge it's built into, I was able to spot an opportunity to profit in GameStop before the Reddit crowd piled in. It was simply a matter of following my system.

Take a look at the following screenshot of GameStop's metrics (you can click the image to make it larger). It comes from my system... 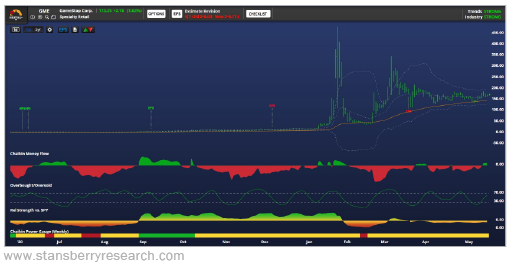 Now, I know there's a lot going on here. We're looking at a lot of information.

Start by turning your attention to the green, yellow, and red horizontal bar all the way at the bottom of the image... That's the weekly version of the Power Gauge rating. This is my full model. The Chaikin Money Flow is built into it.

You'll notice that the Power Gauge rated GameStop as "bullish" (green) starting at the end of August 2020 and through early October. That's because, among other reasons, the company had strong and persistent Chaikin Money Flow performance around that time. You can see that in the above chart, too... It's the gauge with red and green peaks and valleys.

This was the "buy" signal... And it happened months before GameStop would announce a much-needed board shakeup in early January of this year.

The fact is... Keith Gill, the now-famous analyst on the "WallStreetBets" Reddit forum, wasn't alone in seeing the deep value in GameStop. As the Chaikin Money Flow indicator shows, big shots on Wall Street had gotten in, too.

So, sure, there was smart money on the short side of this trade. That's well-documented. But there was also a lot of smart money moving into a bullish position with this stock – and it was happening long before GameStop became a retail media sensation.

The Power Gauge captured that accumulation in late August... And it turned bullish.

After its initial bullish recommendation, the Power Gauge turned "neutral" (yellow) in early October. Don't let that fool you, though... This is the system's way of saying, "We're in, let's wait and see what happens."

If you had bought GameStop shares in August when the Power Gauge turned bullish and held on until it ultimately turned "bearish" (red) in February... you could've walked away with a return of roughly 800% – even after the stock dropped from its late-January high.

And if you had managed to get out around the top, you would've done even better... You could've turned every $1,000 invested into roughly $63,000 in a matter of months.

Obviously, GameStop's short squeeze was an exceptional moment. But the point is that investing success often comes down to knowing what Wall Street is doing...

The insiders will always have the best knowledge. We can't get around that.

Fortunately, though, we can use a variety of tools to level the playing field. And looking at the Chaikin Money Flow – what the smart money is doing – is one of the most important ways to do it.

P.S. I want to share these tools with as many individuals as I can. That's why I hosted a free event to explain the Power Gauge in detail. I walked through what it is... how it came to be... and how it works. I urge you to check out the event replay while you still can. To do that, click here.

Knowing what the "smart money" is doing is a powerful thing. And we can find that out by focusing on this one very simple concept. As an investing tool, it works better than you might think... Get the full story here: This Is Like Sitting in on Private Board Meetings.

Investors are looking at stocks as a one-way ride higher. Even the pros are feeling the market euphoria. And this kind of bullishness gives us a great opportunity to profit... Read more here: Euphoria Has Gripped the Markets.

Longtime readers know that companies that sell everyday goods can make great investments. Over the long term, people will always stock up on staples like cereal, paper towels, and detergent… And they’ll always buy more when they run out. Today’s company sells the snack foods that folks crave…

PepsiCo (PEP) is a $205 billion seller of drinks and snacks. In addition to its Pepsi soda products, PepsiCo’s brands include things like Lay’s potato chips and Quaker oatmeal. And folks keep on buying its everyday products… PepsiCo’s net revenue grew 6.8% year over year in the latest quarter. And earnings per share rose 29% over the same quarter last year.

As you can see, PEP shares are in a long-term uptrend. They’re up nearly 70% over the past five years, including dividends. And as folks keep buying their favorite snack foods, that steady growth should keep going… 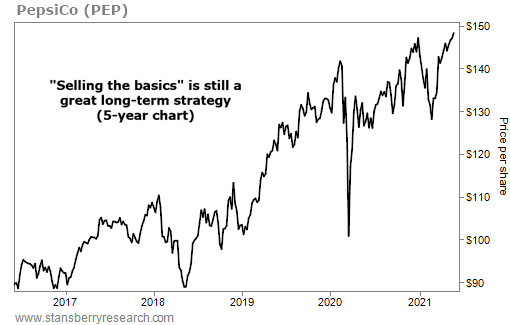