The stock market boom isn't the only thing that's nearly a decade old...

We're almost a decade into an economic boom, too. The U.S. economy has recovered more slowly than many had hoped. And there are still plenty of problem areas... like the ballooning government debt and the hollowing out of Middle America.

Still, if you look at the big picture, the U.S. economy is doing fantastic... And folks are feeling it, too.

Consumer confidence just hit its highest level since 2000. So is that good or bad for stocks? The answer isn't obvious. It's a bit of both.

Stocks and the economy have a hazy relationship.

The absolute best time to buy stocks tends to be during recessions... when the economy is in terrible shape. That's when you get the best deals, because prices are low.

Still, you can do darn well in stocks when the economy is thriving, too. Falling unemployment, rising wages, and overall growth are fantastic backdrops for a stock market boom.

Booms don't last forever, though. And it's no surprise that stock market peaks tend to happen when the economy is doing well... and on the verge of rolling over.

Where does that leave us today?

For starters, the economy is doing great... the best we've seen in 18 years, according to The Conference Board Consumer Confidence Survey.

This is a monthly survey that asks a few thousand U.S. households their thoughts on the economy. The end result is an overall feel for what real Americans think of the economy. And today, they believe things are going great. Take a look... 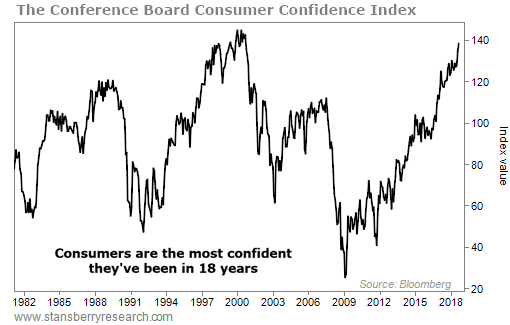 Said another way, consumer confidence hasn't been this high since the last true bubble in U.S. stocks. But that doesn't mean stocks have to crash now.

You see, like a lot of economic indicators, consumer confidence tends to hit highs and stay at elevated levels near the end of a boom. But it's not until the levels drop dramatically that the top is in and the bad times come.

You can see it in the chart above. Consumer confidence hit its first dot-com high in early 1998 – around two years before the eventual peak.

The same thing happened in the late 1960s. Consumer confidence hit extreme levels in 1967. But the eventual peak didn't occur for another two years.

Consumer confidence is near a multidecade high. Ordinary Americans realize the economy is doing well. They're as excited about today's prospects as any time in recent years.

That won't last forever. And we'll likely see sentiment at similar levels when the stock market peaks – but we're not there yet.

We'll wait to see signs of the economy rolling over before we panic. That's not happening today – so don't let this optimism fool you. We can still make money in U.S. stocks.

Steve and his team track a number of "early warning" indicators that will signal the end of the stock market boom... and the arrival of the next recession. Learn about two of them here: What the Early Warning Indicators Say Now.

And just last week, Steve shared another simple indicator from The Conference Board... one that has predicted every recession of the past 50 years. Read more here.