The global order is changing. But truth is... the change doesn't feel like much.

In my daily life, I haven't noticed it. I'm guessing you haven't either.

I have friends who understand it, though.

They're academic types... the ivory tower folks. They're researchers and tinkerers.

One chip at a time, people like them are carving the block of human knowledge. They're forming it into something just a little bit more useful than what it was the day before.

People like this get paid to be smart. They're the nation's "brain capital." And they're sounding a warning...

The U.S. is getting walloped in science spending.

Or, as my buddy Adam puts it, "The U.S. is underinvesting in STEM research relative to its peers."

Unfortunately, as investors, we can't pretend this isn't happening. Here's why it matters...

Adam holds a PhD in the theory of computation. He's a heavy hitter in the world of quantum computing. And he's easily one of the smartest people I know.

In a private e-mail, he warned me about the widening gap between the U.S and the rest of the world...

He says that in his field, "the U.S. government has committed $1.2 billion over the next five years... but the Chinese are believed to be spending 10 times that!"

Now, maybe you're inclined to dismiss this outright. Adam is, after all, an ivory tower type. So it would be easy to assume he's out of touch... or that he's hyper-focused on a niche field that says nothing about broader science spending.

But the data says otherwise.

In 2000, the U.S. accounted for 37% of global research and development (R&D) spending. That's a lot for a country that only has 4.3% of the world's population. Unfortunately, the U.S hasn't been holding steady.

China is sprinting. The U.S., by comparison, is standing still.

Here's another way to see it... 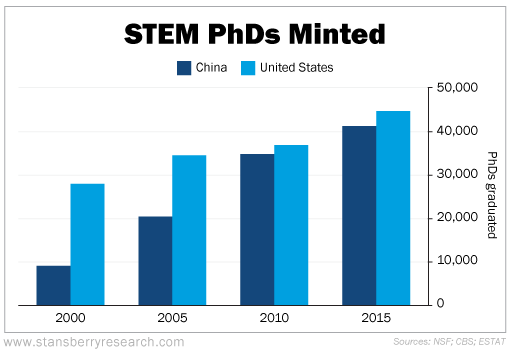 "STEM" stands for science, technology, engineering, and mathematics. It's the bread and butter of a nation's scientific development.

Students earning doctoral degrees are regularly used as the standard for a nation's commitment to a field. They show us how many people are filtering up to "expert level."

That's not bad at all for a highly developed nation. But again, China is sprinting...

Over the same period, China grew its number of PhD STEM grads by an incredible 353%. And as of 2015, it had almost caught up to the U.S. in overall numbers.

As an American, this is hard to accept. And I bet many, like me, would prefer to pretend this isn't happening.

But investors aren't afforded that luxury.

As investors, we have to keep our money in line with global trends. Ignore them, and you could face years, even decades of portfolio underperformance.

China is sprinting – not just in science, but in countless fields and industries. And it's a big reason why I expect Chinese investments to do well in the coming years.

"There will always be a reason not to buy as an investor," Chris Igou writes. With all the seemingly "world ending" scenarios going on in China, it's easy to be scared out of the market. But if you dig a little deeper, you'll see that you could be missing out... Learn more here.