Everyone Hates Housing... But Don't Expect a Crash
By Brett Eversole
Thursday, December 1, 2022

Take one look at the stock market, and you'd think we're in a full-blown recession. But the bad news hasn't shown up yet in key economic data like employment and spending.

It has arrived in one place, though: the housing market.

Two weeks ago, we discussed the collapse in existing home sales. The year-over-year decline is one of the largest on record. Buyers and sellers are gridlocked... And that's likely to continue.

This slowdown in home sales has now plunged sentiment to a record low. But if you think that's another sign that a crash in prices is imminent, you're dead wrong.

To say housing is in a slowdown would be the understatement of the decade.

We know that home sales have slowed to a crawl... Mortgage loan applications are down more than 60% this year... And layoffs in the sector have spiked.

Again, the bad news is already playing out in this part of the economy. And housing sentiment has crashed as a result...

We can see it through the Fannie Mae Home Purchase Sentiment Index ("HPSI"). Fannie Mae builds this monthly index out of the data from its National Housing Survey. This survey asks 1,000 households how they feel about things like owning and renting, personal finances, home-price changes, and the economy as a whole.

That makes the HPSI a simple way to figure out how regular folks feel about housing. And right now, they're darn bearish.

Specifically, the HPSI just hit its lowest level on record. Take a look... 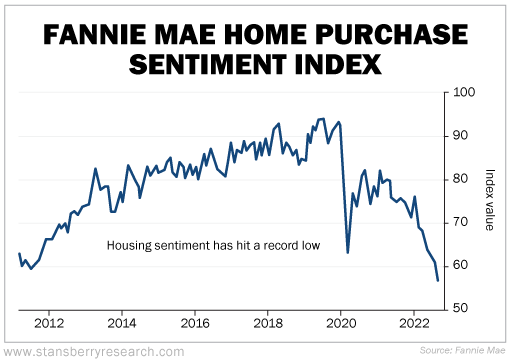 This index has fallen for eight straight months. And the most recent reading of 56.7 is the lowest on record.

Importantly, the HPSI data only goes back to 2011, long after the last real estate bust began. But back then, prices didn't actually bottom in most of the country until 2011 or 2012... So a sentiment reading below those levels still tells us just how bearish folks are right now.

Today's bearish sentiment shouldn't come as a surprise, either. Just about everything is working against the housing market today... including high interest rates, ultra-low affordability, and a buyer pool that's completely drying up.

But all that bad news still doesn't tell us a crash is coming.

Unlike the last bust, homeowner health is still solid. Most folks aren't underwater on their mortgages. And homeowner equity is still 46% higher than it was before the pandemic.

That's good. It means potential sellers can wait out the storm for a while. The downside is, all of this is a recipe for gridlock – where few folks want to buy or sell, and prices go flat or fall slightly.

This stalemate could last for a while, too, until interest rates begin falling. But it doesn't change the long-term picture for housing...

We're still millions of homes short of our supply needs in the U.S. In fact, a housing slowdown means the shortage could get worse before it gets better. So, we still have plenty to be excited about for housing prices – if you have a long-term view.

Unlike what we saw in the last housing bust, homeowners are on solid footing. And that's a major reason why we shouldn't expect a 2008-style crash this time around... Read more here.

"Even if interest rates continue to rise, mortgage rates don't have to rise in lockstep," Brett explains. That's important – because one measure suggests that mortgage rates could see some relief soon... Learn more here.