Here's What Weeks of Losses Mean for Stocks
By Brett Eversole
Thursday, June 2, 2022

Stocks just managed something we haven't seen in 21 years... And as you can probably guess, it wasn't positive.

In total, stocks have lost money for seven straight weeks. This rare feat hasn't occurred since 2001. And it has happened just five other times since 1950.

Clearly, the trend is down. So you'd probably be surprised to hear that after those similar setups, stocks absolutely soared... But that's exactly what happened.

Markets rarely fall for this many weeks in a row without a break. Usually, we'll get a "relief rally" midway through, where prices temporarily recover before the downtrend resumes.

That wasn't the case with the recent market slide, though. As I said, stocks recently fell for seven straight weeks.

This is incredibly unusual. It has happened just 0.1% of the time since 1950. That's only five other occurrences in 72 years.

This time around, it lasted throughout April and only ended last week. Take a look... 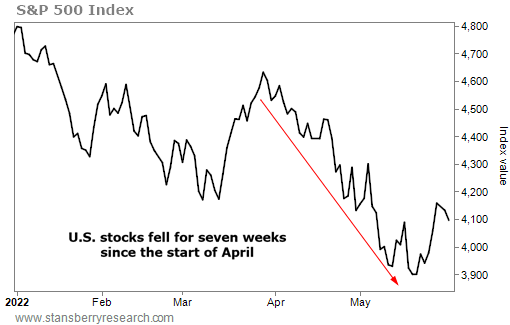 Normally, we'd expect this kind of downtrend to lead to further losses. That's usually the nature of trends... But in this case, we're seeing something different.

Instead of falling, stocks tend to soar after this rare setup. The table below shows it...

That's a massive reversal versus what we've seen so far in 2022. But it's possible now, based on history.

To be fair, this is incredibly rare. So to get a few more instances, I looked at every setup where stocks fell for six straight weeks as well. The numbers aren't quite as impressive. But these cases led to outperformance as well...

After the six-week falls, we see lackluster performance over the next three and six months. That changes over the next year, though...

Similar setups have led to gains of 10.2% versus the typical 7.9% return. And that has translated into profits 74% of the time.

No matter how you look at what just happened, this is a rare event. So we shouldn't "back up the truck" and buy based on past results alone. However, this is a sign that the recent brutal sell-off could be nearing an end.

"If you're inclined to give up on the stock market entirely, that might not be the best move," Brett writes. Folks are hesitant to put their money to work in today's volatile market. But staying on the sidelines too long could cause you to miss out on huge gains when the trend reverses... Learn more here.

"Markets tend to bottom when no one is excited about buying," Brett says. And that's what we're seeing right now with investors fleeing stocks in droves. But history shows these bad times could lead to massive returns if we stay patient... Read more here: Stock Market Bulls Have Disappeared.

Market Notes
BUSINESS IS BOOMING FOR THIS INSURANCE STALWART

Today, we’re reviewing one of our favorite ways to invest…

Longtime readers know our founder Porter Stansberry called property and casualty (P&C) insurance the “world’s best business.” Insurers collect premiums up front… And the best ones make more than what they eventually pay out in claims. Plus, insurers can invest the money they hold – called “float” – and keep the gains. Today’s company is a perfect example of how well this works…

W.R. Berkley (WRB) is a $20 billion insurance giant. It sells P&C insurance in more than 60 countries worldwide. W.R. Berkley became a titan in the industry due to its ability to consistently grow its book value and return on float. And its stellar team of underwriters has helped it maintain its standing… The company posted record quarterly underwriting income of $274 million in the first quarter, helping net income skyrocket nearly 160% to $591 million.

As you can see, WRB shares are performing well. They’re up nearly 50% over the past two years… And they recently broke out to a fresh all-time high. It’s more proof that insurance is still the world’s best business… 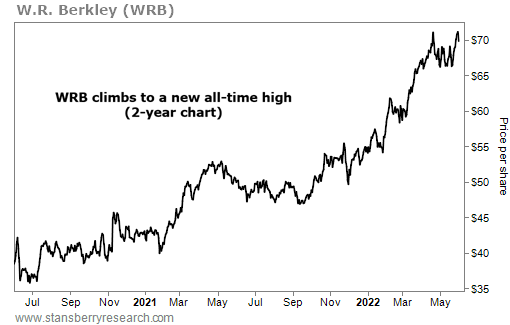