Here's Where Domestic Tourism Will Recover First
By Brian Tycangco
Monday, May 11, 2020

No two industries have suffered more from the new coronavirus than travel and tourism...

Together, these two industries were worth $8.8 trillion in 2018. That's about 10% of global GDP. But over the past couple of months...

Today, many travel and tourism companies that were doing well just a few months ago are suddenly floundering.

A lot of them will need bailouts. Others, like car rental giant Hertz (HTZ) and airline operator Virgin Australia (VAH.AX), are looking to file or have already filed for bankruptcy.

Even investing legend Warren Buffett recently admitted to throwing in the towel on all his airline stock holdings. So investors are finding it hard to see light at the end of the tunnel.

They're certainly not looking to China for opportunity. But when it comes to travel and tourism, China will be among the first to recover.

In 2018, China ranked first in the world in terms of tourism spending abroad – worth a massive $277 billion.

That's almost double the $144 billion spent by tourists from the U.S. during the same year. 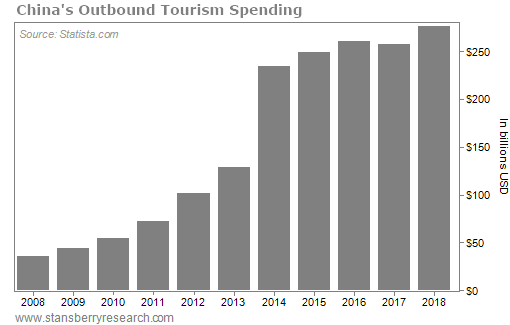 That's a lot of money going to things like hotels, transportation, and shopping.

But the coronavirus pandemic has put an abrupt halt to all this. International flights in China plunged 56% in the first three months of the year... falling 90% in March alone.

Because of fears of a second wave of infections, nobody knows exactly when airports and borders will open again to Chinese tourists and travelers.

Anti-China sentiment is also growing in many Western economies. And it's clear this will scare off Chinese tourists from traveling to places where they might fear for their safety.

That's going to be bad for Chinese outbound tourism... But it's great news for China's domestic travel and tourism industries.

You may not know this – but China already has the world's largest domestic travel and tourism markets.

In 2019, Chinese tourists took 585 million domestic flights. And in 2018, more than 3.4 billion passengers used the railway. Including all other forms of transportation, the Chinese take close to 5.5 billion domestic trips each year.

That's twice the number of domestic trips made in the U.S. each year. And before the pandemic struck, Chinese domestic travel and tourism were also growing at double-digit rates.

These industries suffered when China locked down domestic travel. But China is a massive country, with a land area nearly the size of the U.S. And thanks to huge investments in railway and highway infrastructure, it's relatively easy to get to most of China's 800-plus cities.

Now that China has reopened nearly all of its cities, malls, hotels, tourist attractions, and transportation networks, its domestic tourism industry is on a path to recovery.

We don't have to go too far back in history to see how fast this can happen...

After SARS brought the country's travel and tourism industries to a virtual standstill in 2003, Chinese airline stocks more than doubled from their lows in less than a year. Railway and airport stocks jumped more than 50%.

Just like the last time, the recovery from this crisis will open up some of the biggest investment opportunities in nearly two decades. And it's going to start with the travel industry... in China.

"The talking heads make their money when everyone is scared," Steve writes. Lately, the media's fearmongering about China has gone to new extremes. And that means now is a good time to go against the crowd on Chinese investments... Read more here: The Investment Story in China Hasn't Changed.

"Investors should pay close attention as China opens up its markets," Brian writes. With nearly $1 trillion of new money flowing into Chinese stocks, ignoring this trend could mean missing out on Buffett-like profits... Learn more here: Warren Buffett Would Have Lost This $1 Million Bet on China.