The Investment Story in China Hasn't Changed
By Steve Sjuggerud
Thursday, May 7, 2020

I can't remember a time when we heard as much China hate out of the media as we're hearing lately.

It's classic media bias. The network executives love to stir the pot. And with a new virus that first broke out in China – the most controversial nation in the world today – how can they resist?

They aren't focused on just one story... It's one headline after another – anything to get folks watching and clicking. But that's not what's shocking to me.

What's shocking to me is that when it comes to spreading China hate, many of the worst offenders often haven't even been to China...

One of my favorite examples is 70-year-old China hater Peter Navarro – who had been to China once in his life before ascending to the White House as part of President Donald Trump's China trade team.

Part of understanding China is going to China. I first went to China more than 25 years ago. And since then, I don't know how many times I've been.

I've been to factories... I've given speeches... I've met with some of China's biggest companies and money managers... I've traveled thousands of miles by train.

I am not Chinese. But I have experienced China – and the changes that have happened there – firsthand.

And I can tell you that U.S.-media "armchair quarterbacks" tend to get China all wrong. And that includes the investment opportunity in China. It hasn't changed one bit.

For a long time, the two biggest myths that people in the U.S. believed about China have been:

Both of these beliefs are simply false. They were true 10 and 20 years ago. But not today.

We've seen this change take place in a number of ways...

Maybe that big shift makes you nervous. If so, I hate to say it – but my friend, you're playing right into the media's hands. The talking heads make their money when everyone is scared.

And if you're running with the crowd... it will be that much harder for you to make money, too.

This is an opportunity you can't afford to ignore as an investor.

China is seeing incredible growth and innovation today. It's quickly moving toward a position of global leadership when it comes to technology. You might not like that. But it doesn't change the reality.

This is why I've spent countless essays writing about the opportunity in China over the last few years. And no, the current global crisis hasn't changed that story at all.

So don't fall for the media bias. If you're looking to make a smart, long-term investment bet, you should own U.S. stocks... But you should also invest in China.

Most investors have a flawed mindset called "home-country bias." They wind up leaving too much of their portfolios wrapped up in the country they're from. If you're one of these people, it's time to diversify some of your investments... Get the full story here: How to Avoid This Critical Investment Mistake.

China is experiencing what might be the craziest anomaly in finance. It's an imbalance that could make you a lot of money. But it won't last forever. And that means now is the time to take advantage of this opportunity... Read more here: The Craziest Anomaly in Finance.

Market Notes
THE BULL MARKET IN ONLINE CALLS IS HERE

The COVID-19 outbreak has scattered much of the world’s workforce out of their offices and into their homes, and it keeps families and friends from visiting each other. Helping folks communicate remotely is an essential business right now. And this Internet-based communications firm is one of the winners…

Bandwidth (BAND) is a $2 billion software company that supports online calls and messages. Its customers include Alphabet’s (GOOGL) Google, Microsoft’s (MSFT) Skype, and Zoom Video Communications (ZOOM). Bandwidth typically charges less than a penny per minute for calls through its dedicated network, but that adds up in a hurry – especially with more people using these services amid today’s lockdowns. Sales hit $68.5 million in the most recent quarter, up 29% year over year.

Since Bandwidth went public in late 2017, its shares have exploded about 400% higher. They just hit a new all-time high. As folks keep working remotely, the company’s good fortunes should continue… 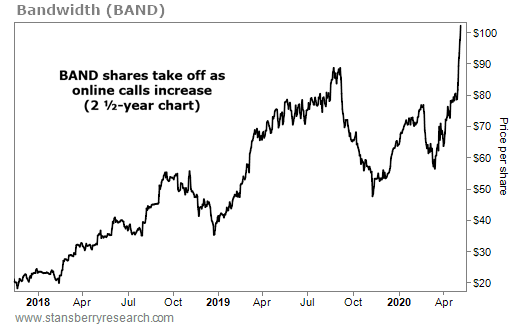