The No. 1 Thing Americans Get Wrong About the Trade War
By Brian Tycangco
Monday, September 9, 2019

The retail area alone was big enough to fit three football fields. But it filled up quickly.

By 9:20 a.m., the wait time for a parking space was more than two hours long. Yet hundreds of people still waited to get in.

Inside the store, it was mayhem. Shoppers were practically fighting each other for gallon-jugs of Heinz ketchup, bottles of Kirkland multivitamins, and cases of Chilean Fuji apples.

Cashiers had lines stretching to the back of the store with two-hour waits. It was a chaotic scene, reminiscent of Black Friday shopping madness.

The store was so overwhelmed, it had to set a limit of 2,000 shoppers per day. And by the end of the week, Costco promised to open a second branch nearby.

The only thing was... this wasn't happening in California, Oregon, or any other U.S. state.

It happened in Shanghai, China's largest and most populated city. And it's a perfect example of what the Western media gets wrong about China.

Costco is a perfect example of a U.S. brand that's doing exceedingly well in China. Coffee giant Starbucks (SBUX) is another.

The Chinese absolutely love Starbucks. The company now has well over 3,600 stores in the country today.

That includes the world's second-largest Starbucks store in Shanghai, with a cavernous 30,000 square feet of space. Starbucks plans to double its stores in China over the next five years.

And get this... Kentucky Fried Chicken (or "KFC") is China's most popular fast-food chain, too. It currently has 5,900 outlets in China. That's more than double what it had just 10 years ago.

These U.S. brands are growing rapidly in China. And it's all because of the same factor... the country's rising middle-class.

We can see it in what happened at Costco's first store in Shanghai. It's undeniable. It's powerful. And it tells us that Chinese consumers couldn't care less about the trade war.

Retail sales in China, for instance, were up 7.6% in July – more than double the rate of growth in the U.S. But you'd never know it from watching the news.

Just about everything we're hearing about China lately has been negative. And, yes, a lot of the criticisms are well-deserved. (I'm no apologist for China.)

But as an investor, it's important to know what you aren't hearing. When all you hear about a country or market is bad, it's a sign that most people – and most investors – aren't looking at it.

China has become one of the most hated markets, no doubt. That means amazing situations – like the growth of China's middle-class – are going unnoticed... And it leaves the door open for the smart money to enter.

The clearest proof of this is the performance of a little-known exchange-traded fund called the Global X MSCI China Consumer Discretionary Fund (CHIQ). It's a targeted play on the consumer discretionary sector of China... It covers everything, including e-commerce, private education, food and drinks, travel, and traditional retailers.

Despite the ongoing trade war, CHIQ has outperformed both the S&P 500 Index and the Nasdaq so far this year. Take a look... 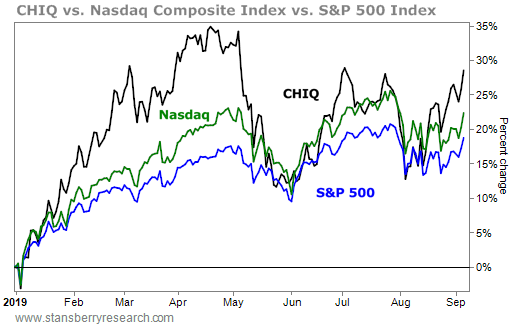 CHIQ is up 29% since the start of the year. It has also gained 9% over the past month compared with a mere 2% gain for the U.S. market.

The point here is simple...

Investors are still worried about the trade war. And most of the news coverage on China is bad. But none of this news is hurting the Chinese consumer, or the growth of China's middle-class.

China is doing just fine. And investors who understand that can position themselves to make a lot of money.

Brian recently shared a firsthand account of his trip to Hong Kong... and a big reason he sees upside ahead for investors. Get the full story here: The Hong Kong Protests Will Give Way to Opportunity.

"You can see why it's easy to develop a bias against the world's second-largest economy," Brian says. "The problem is, bias against China could be costing you a lot of money." Don't let fears stop you from taking advantage of the opportunity in China... Read more here.