How the 'Wedding Boom' Will Boost the U.S. Economy
By Sean Michael Cummings
Tuesday, March 1, 2022

More than a quarter of American adults stayed celibate last year... And the number of adults living with their partners is at a 30-year low.

Maybe it's a result of COVID-19 safety, which has turned courtship into a tangle of logistics. Or it could be the constant drumbeat of bad news, which has dampened the national mood...

Whatever the reason – America hasn't been feeling very romantic lately.

But that's about to change.

A major indicator is showing that our national lonely spell is about to break... with a massive impact on the economy.

It's time to get ready for the Wedding Boom.

America's "relationship status" may feel like a soft metric. But it has a big effect on commerce...

Projected spending for Valentine's Day 2022 was a near-record $24 billion. And the average person planned to spend 44% more on the holiday than they did last year.

What's more, three-quarters of participants called giving gifts on Valentine's Day 2022 "especially important." Of course, they were referring to the current state of the pandemic.

These signs all point in one direction...

Reopening is underway. Americans are eager to open their hearts... and their wallets.

This trend is especially visible in America's biggest romantic business – the wedding industry...

Before COVID, 2.2 million couples got married in an average year. But that figure plummeted in 2020.

In the first year of quarantine, marriages slumped by 40%.

2021 saw a modest comeback. As vaccines hit the shelves, 1.9 million couples were able to get hitched. But it was still a below-average year... especially considering 27% of these marriages were postponements from 2020.

Compared to pre-pandemic numbers, last year's demand was still weak. But 2022 should be a boom year for the industry...

Experts expect 2.6 million weddings this year. That's 15% more than the pre-pandemic rate. And it would be the highest number of weddings in 38 years.

It's not just a bump in numbers. The New York Times launched a weekly print section this month titled "Year of the Wedding." This trend is a certified cultural phenomenon.

Tailors, venues, caterers, bakers, and photographers will all profit from this rising tide. Small business will soar.

But the boom doesn't end there... because guest counts are also expected to swell.

Projections suggest an average of 129 guests per ceremony – 22% more than last year. That's more than 335 million guests in total.

The average cost of attending a ceremony last year was $460 per guest. That figure is likely to go up... But even if it doesn't, wedding guests will spend $154 billion in the next year. That's a lot of money that will go toward the costs of gifts, travel, apparel, and more.

Between ceremony and guest spending, marriages will inject $224 billion dollars into the economy next year. That almost equals the 2021 spending of the Department of Education.

Times are tough in the world today. But while that's true, keep this in mind... Consumer outlook is as bullish as ever. It's a great time to be invested in the U.S. economy...

Because, as a wise wedding singer once said, "The best is yet to come."

When the market pulls back, investors are quick to lose confidence and throw in the towel. It's exactly what happened a few months ago. But stock prices aren't the only measure of the economy's health... Get the full story here.

Despite a handful of pullbacks, many stocks recovered their pandemic-induced losses last year. But if you watched for this one signal, you probably weren't surprised by the economic rebound... Read more here: The One Indicator That Explains It All.

As we’ve discussed recently here in DailyWealth, uncertainty has gripped the markets. Continued COVID-19 fears and inflation have led to global supply-chain issues… And now, Russia’s invasion of Ukraine has made matters worse. Today’s company, however, is benefiting from the supply-and-demand challenges…

Mosaic (MOS) is the world’s leading producer of phosphate and potash, which are essential ingredients in fertilizer. The company has customers in more than 40 countries. And recently, Mosaic has experienced a surge in demand – and in its prices. You see, Russia was the world’s largest exporter of nitrogen products in 2021. Now, sanctions could disrupt global supply – and Mosaic is positioned to pick up the slack. That’s in addition to the strong growth it’s already seeing… The company recently reported full-year revenue up 42% to $12.4 billion.

As you can see, MOS shares have soared over the past two years. They’re up 200%, and they recently hit a new all-time high. As long as this supply-and-demand picture lasts, this uptrend should continue… 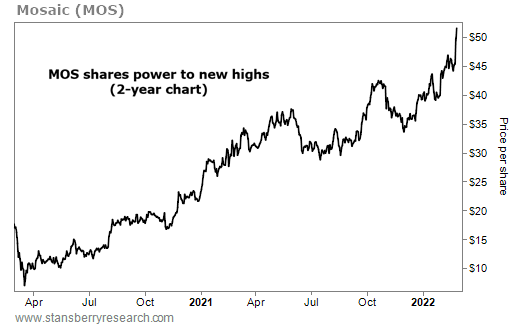