This Is What Unbridled Financial Excess Looks Like
By Dan Ferris
Wednesday, March 2, 2022

Editor's note: Nobody can predict the market top. That's why it's better to prepare your portfolio for a range of possibilities. Today, in a piece updated from his October 1, 2021 Stansberry Digest, our colleague Dan Ferris details a "bubbly" story from the art world... And he'll be back this week with his view on the bubble in stocks...

Over the past several months, I have proclaimed that "this is a bubble"...

Of course, as soon as I say it's a bubble, a crazy story appears in the industry prone to the weirdest financial excesses, suggesting the current bubble is as frenzied as ever.

My goal over the next couple of days is not to call the top. Instead, I simply want to give you a sneak peek of what it feels like at the top. (Hint: It feels just like this.)

But before we do that, I can't resist a good story from the art world... There's just no other place to find sheer, unbridled financial excess like you'll find in fine art. (OK, "fine" is debatable – but you know what I mean.)

I thought I had seen it all, until the latest example came across my desk.

In short, several months ago, the Kunsten Museum of Modern Art in Aalborg, Denmark, contracted Danish artist Jens Haaning to recreate a pair of his previous works...

According to multiple reports, Haaning first exhibited the two pieces, "An Average Austrian Annual Income" and "An Average Danish Annual Income" in 2007 and 2010, respectively. The pieces were created as visual representations of the two countries' average incomes at the time of each work – 25,000 euros (roughly $29,000) and 328,000 Danish kroner ($37,800).

In addition to the undisclosed amount that the museum agreed to pay Haaning, it gave him $84,000 in cash to use as part of the two pieces of art. Haaning signed a contract that said the cash was to be displayed on the works... It wasn't his money to keep, and it had to be paid back when the exhibit closed on January 16, 2022.

However, as you can probably guess since I'm telling you about it, Haaning had other plans...

Instead of the two works requested by the museum, he submitted something much more interesting – two blank canvases under a brand-new title, "Take the Money and Run."

Haaning is apparently known for art that promotes activism with a sense of humor.

The humor part is obvious... Even museum director Lasse Andersson laughed when the newly delivered crates containing the works were opened, revealing the blank canvases.

But what's the activism angle, you ask?

How much artists get paid.

According to a press release from Haaning, by changing the title and submitting blank canvases...

[He questions] artists' rights and their working conditions in order to establish more equitable norms within the art industry.

I encourage other people who have just as miserable working conditions as I do to do the same.

Rights... more equitable norms... miserable working conditions... for gluing cash to canvases. Or this time around, for doing nothing!

Demanding that artists submit work you can actually see seems like nothing short of slavery... I bet some evil capitalist thought it up, just to keep artists enslaved.

Imagine being an artist who works for a global company like Disney (DIS)... or maybe some big advertising agency in charge of marketing. They must crank out a constant flow of real artwork that you can see. And I bet some of those folks don't even make $100,000 per year!

But they should darn well also have the right to submit nothing and get paid for it... or at least, the right to throw a banana against the wall and collect an extra $120,000 for it. They should all show up for work tomorrow... submit something invisible... and demand a big, fat raise.

Thank heaven for frontline warriors like Haaning... He's striking at the root of this horrendous abuse on behalf of oppressed artists all over the world, the voiceless folks who are required to do actual artwork by heartless capitalist pigs.

I hope you sensed my sarcasm. I could keep going on this rant forever...

An artist saying he's underpaid to produce absolutely nothing is even crazier than the $120,000 banana and the $69 million NFT. It also trumps the previous work of invisible art in Italy, because that guy only got $18,000... which, by the way, he was paid outright without stealing it. He failed to get into the activist spirit like Haaning.

As Haaning said in a Danish radio interview, "the breach [of contract by taking the money] is part of the work." Not keeping your word is art these days, apparently.

The Danish museum has since issued a civil lawsuit to get the money back – although Andersson, the museum director, did admit that the exhibit was more popular than he expected.

I'm betting on Haaning, though... If he's smart, he has already converted the money to bitcoin and laughed all the way to Thailand.

Like the art world, the financial world is full of intangibles that can attract outrageous valuations...

But in a bubble, even the most valuable assets wind up being inflated well beyond their real value. And that means they also have a date with a bear market destiny.

More on this soon...

Editor's note: Dan says the speculative bubbles in the market are bursting, one by one. Even worse, inflation just hit 40-year highs – which means it's already destroying your wealth, regardless of exactly when the next bear market hits. That's why Dan's brand-new "game plan" to protect your wealth is a must-see today... including why he believes it must feature a very specific gold play. Learn more here.

Following the consensus as an investor only looks wise – until the foolishness is revealed. Right now, investors are snatching up any speculative asset they can. But you don't have to make the same mistakes as the average person... Learn more here: The Fools Can't Find a Risk They Don't Like.

When investors pour record amounts of money into any asset, no matter how expensive, you can be sure that we're in a bubble. And when it bursts, you need to be prepared for the fallout... Read more here: Speculative 'Can't Lose' Psychology Is On the Loose.

Historically, the U.S. military is usually involved in conflicts that take place around the globe. It spends hundreds of billions of dollars preparing for combat – to the point where defense contractors might just as easily be called “offense” contractors. Right now, we’re seeing a new surge in that long-term story with the Russian invasion of Ukraine…

Lockheed Martin (LMT) is a $120 billion military contractor. It builds helicopters, planes, and missiles – including the anti-tank Javelin missiles that it produces with Raytheon Technologies. Recently, the U.S. has been sending Javelins to Ukrainians in the fight against Russia. And as Russia’s harrowing attacks continue, more countries are looking to bolster their defense spending… like Germany’s decision to boost its defense budget to 2% of its gross domestic product over the weekend.

LMT shares have risen 17% since the start of the invasion on February 24 – reaching multiyear highs. With tensions around the world escalating, the demand for Lockheed Martin’s equipment and weapons will be sure to increase… 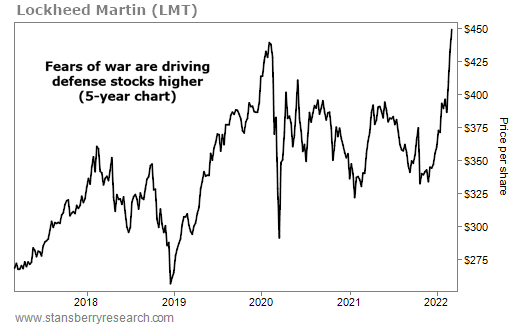