If there was any doubt, it's gone now...

That has led to big returns in recent weeks. And importantly, one big Melt Up sector is breaking out right now.

It was one of the biggest winners during the Melt Up in the late '90s. The entire sector jumped 500% in the final innings.

Now this sector is breaking out once again. It recently hit a new 52-week high. And history says that this breakout should lead to more gains.

Technology stocks as a whole are the poster child of the last great Melt Up during the dot-com boom. But surprisingly, they weren't the biggest winners back then.

That title goes to a subsector of technology stocks... biotechnology.

While tech stocks jumped around 200% in the final 18 months of the 1990s boom, biotech stocks crushed that return. They soared more than 500% over the same period.

We're once again seeing what's possible in the biotech sector. After bottoming in early October, this sector is breaking out. It's up 24% from its recent bottom.

Importantly, it hit a new 52-week high in the process. Take a look... 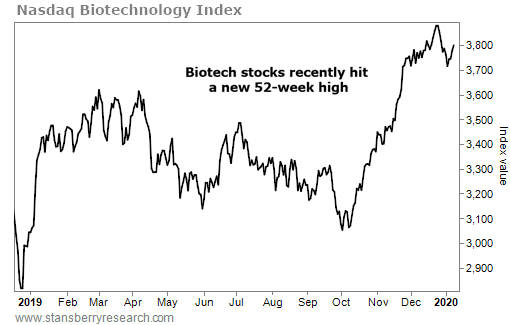 Biotech stocks have had a strong rally over the past two months. And as you can see in the chart, they hit a new 52-week high in the process.

Lots of folks would look at this kind of move and assume the worst. They'd think they missed all the upside. But after studying markets for years, I've learned that following trends really works.

Higher prices tend to lead to even higher prices. And that's the case in biotech stocks too.

Similar breakouts have been great buying opportunities over the past few decades. Since 1993, buying after biotech stocks hit a new 52-week high has led to strong outperformance. Check it out...

In the long run, owning biotech stocks has paid off. The sector has returned nearly 12% a year for more than two decades. But you can improve your upside potential by buying after big breakouts like the one we just witnessed.

Similar cases have led to 6% returns in three months, 9% in six months, and 15% over the next year. Those are big returns. And we could do even better this time around...

Biotech stocks were a huge winner during the last Melt Up. They soared 500% in less than two years back then.

Today's Melt Up is in full swing. Stocks are hitting new all-time highs. And biotech stocks are along for the ride... with big upside potential from here.

If you're looking to take advantage of this, you can check out the iShares Nasdaq Biotechnology Fund (IBB). It's a simple fund that tracks the biotech sector. And based on history, it should be a big winner in the coming months.

"Nobody will fault you for not investing," Steve writes. "Meanwhile, you won't make any money." If you're scared to put money to work with the market hitting new highs, these four tips will help you make smart investments... Learn more here.

"We could easily see 5,000 on the S&P 500 before the boom times are over," Vic Lederman says. It's true that stocks are expensive today. But that doesn't mean the bull market can't continue... Get the full story here.