Yesterday, I told you about streaming giant Netflix (NFLX) and its recent slide in U.S. subscribers. I would say Netflix has probably been a bad bet that turned out well for a few years...

After all, no one had any reason to believe the company would have a great advantage in delivering video content over the Internet. The Internet tends to be a highly competitive place. The "winner-take-all" businesses like Amazon (AMZN), Facebook (FB), Apple (AAPL), and Google's parent company Alphabet (GOOGL) tend to be the exceptions, not the norm.

Yet many investors still seem to believe Netflix can do no wrong. And they believe the same about the other high-flying tech stocks above – collectively known as the "FAANG" stocks.

They don't seem to wonder if it's a good bet that these giants will see similar growth in the next decade... or if those days are done.

I believe it's high time we turned back to the long-term investment strategies that have lagged lately. Today, I'll explain why...

Investing is hard in part because it involves elements of chance. Even when you're one of the best of the best... operating under the perfect circumstances to outperform and make a perfectly rational decision... the situation can still go against you.

I can't help being reminded of Ecclesiastes 9:11 from the Bible...

I returned, and saw under the sun, that the race is not to the swift, nor the battle to the strong, neither yet bread to the wise, nor yet riches to men of understanding, nor yet favour to men of skill; but time and chance happeneth to them all.

It's a humbling passage.

But even though "time and chance happeneth to them all," the swift, strong, wise, or skilled should not change what they're doing.

For the past decade, "value investing" has underperformed other strategies. Just look at a simple comparison of the Russell 3000 Value and Growth Indexes... 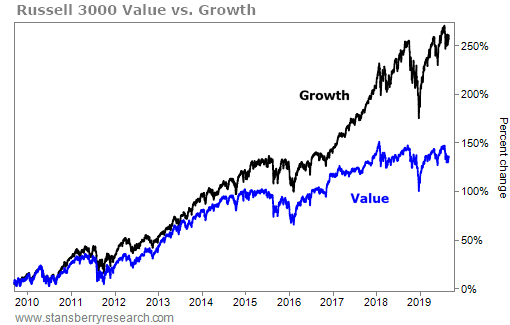 But eventually, we're bound to get a reversion to the mean. It's also worth noting that the index of growth stocks fell further during the late 2018 downturn than the index of value stocks.

I bet we'll see something similar happen – and to a much greater degree – when a bona fide bear market finally occurs. All the stuff investors are stone-cold in love with right now – which still includes Netflix, despite its recent drop – will do much worse than all the stocks investors have shunned over the past 10 years.

The metal and companies that produce it still haven't recovered from when gold reached an all-time high of $1,900 per ounce in 2011... when folks were still wringing their hands about the Federal Reserve's extreme measures to "save the world" from the financial crisis.

The U.S. dollar had fallen 38% from its 2001 high against a basket of global currencies. It was a moment of great fear about the future of the country and currency. Gold was the no-brainer of the moment. And from there, gold went the way no-brainers eventually all go...

GDX has more than doubled off that bottom. But I bet the next gold bull market – which could already be here – will take it well above its 2011 high.

I know what many readers who are familiar with my work are probably saying right now...

But that's the thing... More than a decade into the longest bull market in history, with U.S. stocks trading at their highest valuations since 1929 by some measures, value stocks and gold are the new songs.

That's what I meant when I wrote about gold in DailyWealth last week. In this market environment, Netflix and other hugely successful growth stories trading in the stratosphere with competition coming out of the woodwork are the tired hits of yesteryear.

Am I telling you that if you don't sell your FAANG stocks today, you'll lose half your money tomorrow? No. I suspect a reasonable use of Stansberry Research's most recommended risk-control tool – trailing stops – will get you out of the building before the smoke gives way to an inferno.

Until then, markets always go higher than anyone would have believed – and certainly much higher than a diehard value guy like me would ever believe!

No, I don't think it's time to panic and head for the exits.

I just think if you're prudent, you're already getting skeptical about assets priced well beyond perfection – and you're getting a lot more interested in what hasn't worked as well in recent years... like value stocks and gold.

If you've been into FAANG stocks for 10 years, keep holding them... but learn to see the world differently. Learn to seriously assess different asset classes.

P.S. When gold soars, gold stocks soar even higher... But if you ask me, the vast majority of gold stocks aren't worth owning – ever. That's why I recently told my Extreme Value readers about a safe way to cash in on the powerful upside of this new gold bull market. If the rally continues, I believe this stock could turn into a five-bagger... or even a 20-bagger over the long term. To find out why, check out my short presentation right here.

Catch up on Dan's cautionary essay on Netflix in yesterday's DailyWealth here: One Question You Should Ask Yourself Before Putting Money to Work.

"You ought to know something else about value investing," Dan says. "You need to start doing it BEFORE the bull market ends." Learn more about his strategy as the Melt Up unfolds here: Hands Down, the Best Way to Make a Fortune in the Stock Market.

Today, we’re revisiting the positives of investing in utilities…

Regular readers know utility companies can make some of the safest long-term investments. Many utilities hold monopolies in their markets. And no matter how the economy is doing, people will always need power, water, and gas sent to their homes. Today’s company is thriving off this business model…

Fortis (FTS) is an $18 billion electricity and gas provider. Through its 10 affiliate companies, Fortis serves more than 3 million customers in the U.S., Canada, and the Caribbean. That’s a lot of steady business for this utility company. Its annual revenues have grown every year for the past five years. Fortis loves rewarding shareholders, too… The company recently boosted its dividend, marking the 45th straight year of dividend increases.

As you can see in today’s chart, shares of Fortis are on a tear. The stock is up more than 30% over the past year, despite worries in the broad market… And it recently hit a fresh all-time high. It’s more proof that you can make safe, steady returns in utilities… 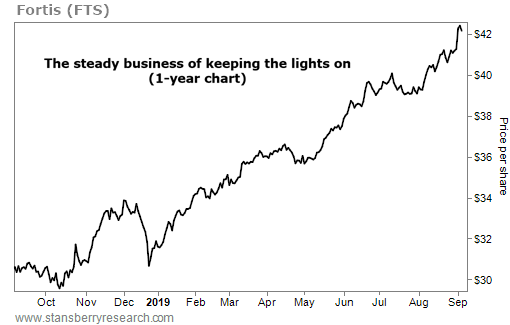