In fact, small-business optimism recently hit an all-time high. These folks have never been more optimistic about the future than they are right now, based on this measure.

That is a good thing by itself. But it's also something we need to keep a close eye on... because a swift decline in optimism could be a warning sign for stocks and the economy.

Around this time last year, small-business optimism broke out to a 34-year high. It was a big upswing in outlook, thanks in part to the 2016 election results.

To see it, we look at the Small Business Optimism Index from the National Federation of Independent Business ("NFIB"). It's a monthly survey of small-business owners across the U.S., which includes information on hiring plans, sales expectations, and overall outlook.

In short, this figure is useful for understanding how folks running small companies are doing now... and how confident they are about the future.

Last year, small-business optimism hit a multidecade high. And it has gotten even better since.

In September, this measure broke out to an all-time high. Take a look... 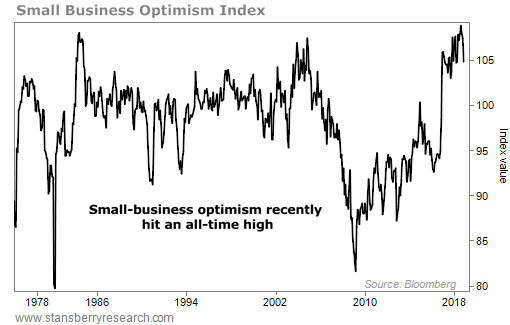 Again, we saw a surge in optimism after the 2016 elections that continued throughout 2017. Now, small-business owners are more excited than ever, going all the way back to 1974.

The real question to ask is what this means going forward... for the overall economy and the stock market. And the answer is mixed...

Longtime readers know exceptional optimism is usually a bad sign for us as contrarians. In this case, though, high optimism isn't a negative like you might expect. Historically, readings above 105 tend to lead to a few more years of boom times in stocks.

What's worrisome about extremely positive economic data is what happens after the numbers roll over. When a good number gets a bit worse, it can be a canary in the coal mine.

Low unemployment, for example, is good. But rising unemployment from extremely low levels is a major warning sign, as Steve explained last week. It could signal a recession and stock market bust.

The same is true for small-business optimism. This all-time high is a positive. But when it begins to decline – especially if it happens quickly – it will likely be a major warning sign for stocks and the economy.

Optimism has dropped slightly from the September high... but it's still elevated. We'd need to see this measure fall below 100 before sounding the alarms.

We're not there yet. So for now, we have one more piece of economic data that says the economic boom and the "Melt Up" in stocks can continue.

"If you want to know when stocks will crash, look at the economy," Steve says. In a recent series, he discussed two of the economic factors that can act as our "canaries" for the stock market. Read the essays here and here.

"The smart money is as bullish as it's been in years," Brett writes. Find out more about this key sentiment indicator – and what it's saying about the short-term outlook for stocks – right here.

Market Notes
EVERY BIG TREND HAS WINNERS... AND LOSERS

Today, we’re looking at a company losing out in the mobile revolution…

Regular readers know we’re always on the lookout for big, secular trends to invest in. And the rise of smartphones is one of the biggest trends of the past several years. Companies are constantly working to develop new technology to push their devices ahead of the competition. And today’s company is getting left behind…

BlackBerry (BB) is a $4 billion mobile-device manufacturer. The company used to be a leader in its highly competitive market. But it began to invest more and more outside of its core business, spreading itself too thin across areas like artificial intelligence and the “Internet of Things.” As a result, BlackBerry’s sales have fallen every year since 2011 – a precipitous drop from nearly $20 billion to just $932 million.

As you can see in today’s chart, BB shares are in freefall. The stock is down more than 30% over the past year, recently hitting a new 52-week low. In any big trend, you get winners – and losers. Make sure to avoid the losers… 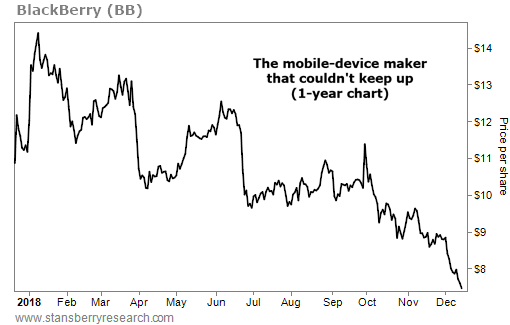