Banks Will Win, Thanks to This New Fed Policy
By C. Scott Garliss
Monday, March 11, 2019

It's no secret that the Federal Reserve has been a major driver of this historic bull market...

First, the central bank cut interest rates to zero in response to the 2008 financial crisis. It held them there for years. Then, it performed several rounds of quantitative easing, buying up bonds to increase liquidity and stimulate the economy.

All of these policies made money cheap and easy to access. They allowed businesses to grow and asset prices to inflate... and helped kick off a decadelong bull market.

Now, the Fed is out with a new policy. Importantly, this latest change is good news for the market... And the big winner should be the banking sector.

In 2017, the Fed announced its first plan to wind down its balance sheet.

The Fed's plan wasn't to sell all the bonds it had bought. Instead, the central bank said it would simply let maturities run off. That meant whenever a bond matured, the Fed would no longer reinvest the proceeds into something else.

It sounded good. But by doing this, the Fed removed a large buyer from the marketplace.

That's one reason interest rates went up in recent years. Less demand meant lower bond prices... and higher rates. Of course, the Fed has also been raising short-term rates directly. It needs to restock its armory for the next economic slowdown – and hiking rates does that.

By the end of last year, investors were nervous. The global growth picture had darkened, thanks to the China-U.S. trade dispute. And Fed Chairman Jerome Powell seemed intent on hiking rates in perpetuity.

When Powell said on October 3 that interest rates were still "a long way from neutral," that was the last straw. From that day until the bottom on Christmas Eve, the S&P 500 Index sold off nearly 20%.

The Fed has changed its tune since then, though. And that creates an opportunity...

In January, Powell said that perhaps the central bank had gone too far. He later said the Fed would continue to reduce the size of the balance sheet... but it might not take it back to pre-crisis levels. He also noted that the Fed would take a more patient approach to rate hikes.

That's where it gets interesting for the banks...

Besides ending the wind-down sooner and with more assets, the Fed now wants to change the makeup of its assets. The most important shift is that it's discussing moving from long-dated holdings to short-dated holdings.

This scenario of higher long-term rates and lower short-term rates is called a "steepening yield curve." And it's a big benefit to bank stocks.

The yield curve has risen since the bottom in December. And as you can see in the chart below, banks have been moving higher... 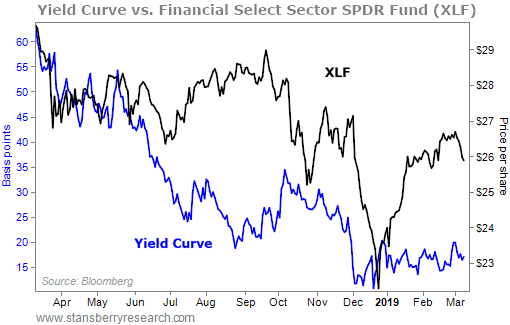 This happens for a simple reason. Banks borrow funds on a short-term basis, and then lend that money out at long-term rates. The difference between those rates is the "net interest margin."

As the yield curve rises, so do net interest margins... And that means higher profits for banks.

Importantly, the Fed's new policy should ensure this continues. Banks will soon be able to obtain money at cheaper rates and loan it out at higher ones. That means higher profits and higher stock prices in the financial sector.

That's why you want to own banks now. One simple way to do that is through the SPDR S&P Regional Banking Fund (KRE), which holds small- and medium-cap regional banks.

The Fed will likely put these actions into policy at its Open Market Committee meeting on March 19 and 20. And it should cause big gains in bank stocks in the coming months.

Editor's note: At Stansberry NewsWire, Scott and his team of analysts show you what's driving the market's moves. Think of it as your "direct line" to Wall Street... with up-to-the-minute news and expert commentary, as well as market research and investing insights. Learn more about this incredible service – including how you can sign up for free – right here.

"The financial sector tallied one of 2018's largest losses... down 13%," Brett Eversole writes. "But things have changed to start the new year." Get his take on the outlook for financial stocks right here.

"It's a script that plays out over and over again in the markets," Scott says. "Events that seem like they should spell doom for stocks often don't." Read more about his perspective on the overall market in the aftermath of a recent big event right here.