The U.S. market has soared this year...

It's up 27% this year, handily outperforming the U.S. And the rally recently pushed it to new 52-week highs.

You might expect a pullback after such strong performance. After all, a 20%-plus rally in six months is hard to top. But history says we should expect more gains ahead...

After hitting a new 52-week high, this market could rally another 12% over the next six months. And that makes it worth considering right now.

Today's opportunity comes from a country most folks have no interest in owning... Russia.

No, Russia isn't the sexiest or safest place to put money to work. And the Russian market led investors to big losses last year, falling 7%.

But that story flipped this year.

The VanEck Vectors Russia Fund (RSX) is up 27% in 2019. And it marched higher through the end of May, even as the U.S. market fell from all-time highs. 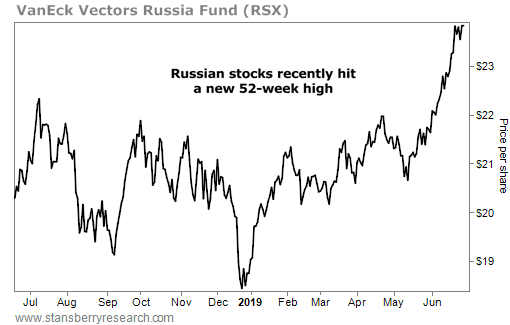 Like most markets, Russian stocks have rallied since December. But they've shown strength even when the U.S. market was weak. The trend is incredibly strong right now.

Importantly, history says that the current uptrend is good news. It means that more gains are likely from here...

Since 2007, buying RSX after a new 52-week high has led to fantastic short-term profits. Take a look...

Russian stocks are NOT a great long-term investment. They've struggled for more than a decade, falling 1% over a typical six-month period. But that doesn't mean there weren't good opportunities to buy.

In fact, buying after similar instances led to 7% gains in three months and a solid 12% gain in six months. Those are solid short-term returns and huge levels of outperformance.

I understand if you aren't interested in Russia. It has a bad long-term track record. And you probably view Russia with caution... for good reason.

Still, ignoring such a powerful opportunity could be a mistake. The current trend is strong, and history is clear. The next six months will likely lead to more gains for Russian stocks.

If you're interested in owning this market, you can do it through shares of RSX. This fund is the simplest way to invest in Russian stocks... And given what's happening right now, it's worth considering today.

"You want to find what others have no interest in owning and put your money to work," Chris writes. Today, he says one market is setting up for incredible gains... And investors absolutely hate the idea of owning it. Learn more in his two-part essay here and here.