Silver hit its cheapest price in 40 years relative to gold a few months back.

The metal was lagging behind gold in a big way. And as I explained to DailyWealth readers in May, this meant one thing...

Silver would come back with a vengeance.

That's exactly what happened. Silver is up 58% since I shared that opportunity. Meanwhile, gold is only up 18%.

Now, I have another important message for you today... If you think silver's rally is over, think again.

The metal has broken out to a new 52-week high. It's showing no signs of slowing down. And based on history, this new high means 20% gains are possible over the next year.

The move we've seen in silver is nothing short of spectacular. The metal more than doubled off its 2020 low. And it did something important along the way.

Silver broke out to a new 52-week high in July. And while that might not sound like much, it's actually darn rare.

In fact, we've only seen 16 similar breakouts going back to 1975. That means you can expect silver to hit new 52-week highs just once every three years.

Now, I realize that buying after new highs is scary for a lot of folks. It feels like silver should be due for a pullback after such a price surge.

But that's simply not the case. These moves are strong buy signals for investors.

That's just how trends work. When prices get moving higher, they tend to keep rising. And today, silver is in a massive uptrend. Take a look... 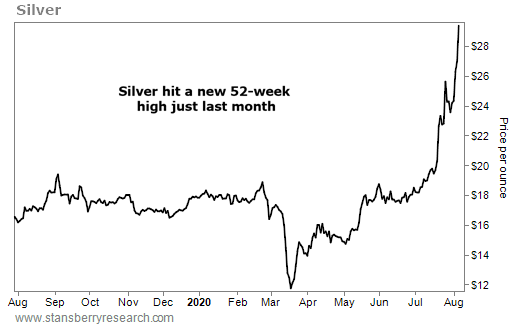 Silver hit a new 52-week high last month. The precious metal has more than doubled since its bottom. And it still has room to run...

Since 1975, buying after breakouts like we're witnessing today can lead to serious outperformance. Just take a look at the table below...

Silver has been a slow mover over the past 45 years... with a typical annualized return of just 4%. But if you only bought after the metal hit new highs, you could've done much better...

Buying after these breakouts has led to 11% gains in three months, 13% gains in six months, and a massive 20% gain over the next year. Now those are gains worth paying attention to.

I realize this is a bit counterintuitive. But following the trend is the smartest move you can make when investing. History has proven it time and time again. And silver is no exception.

So if you've missed silver's rally up until this point, there's still plenty of opportunity ahead. History says a 20% gain is possible, starting now. I urge you not to miss it.

Silver has been rallying over the past several months. But gold is still getting most of the headlines. And when gold is soaking up all the attention, it can have big implications for silver... Read more here: Why Silver Has Never Been a Better Deal Than Today.

It might seem like buying after a rally is the wrong time to get into an asset. But just because an investment has already made huge gains doesn't mean it can't soar even higher... Get the full story here: Gold Is Headed for New All-Time Highs.