For many companies, the end of summer was supposed to mark the return to the office. Many employees expected to come back after Labor Day.

But much like the idea that the initial lockdown in March 2020 would only last for two weeks, office reopening plans are changing. Coronavirus cases have been on the rise as the Delta variant spreads. And large companies are pushing back their scheduled return-to-office dates.

Apple (AAPL) announced on August 20 that it was pushing back its return to the office from October to January. That change came only a month after the company had shifted its September reopening plans to October.

Amazon (AMZN) has delayed its return to January at the earliest, too.

While a fair amount of debate still exists over the effectiveness of remote work, another thought has been crossing many companies' minds: Why pay rent for an office we don't use?

You might think that's a problem for real estate investment trusts (REITs)... the companies that lease office space. But the market disagrees. I'll show you what I mean in a moment...

Smaller firms have already initiated the departure from the office. But the buck stops with the larger corporations.

Companies were already bleeding cash in the San Francisco Bay Area, as those offices sat cold and untouched for months. The new developments caused by the Delta variant are an additional slap in the face.

Companies have been taking office-space asset impairments (a loss of value in accounting)... Between Dropbox (DBX), Salesforce (CRM), Airbnb (ABNB), and Uber (UBER), that comes to more than $1 billion worth of losses since the start of the pandemic.

Dropbox made a particularly painful $400 million investment into a large office space in downtown San Francisco, only to see the homeward shift occur in a matter of months.

Interestingly, when you look at the REITs that dominate the big-ticket corporate office leasing space, you often find these REITs are not being priced for a collapse in lease revenue.

Boston Properties owns buildings like the John Hancock Tower and the Prudential Tower in Boston, the General Motors Building in New York City, the Salesforce Tower in San Francisco, and even constructed the NASA headquarters in Washington, D.C. If any company were to suffer from a corporate reduction in operating leases, it would be Boston Properties.

Using our Embedded Expectations Analysis at Altimetry, we can dissect the expectations for future performance already baked into the company's current stock price.

In the chart below, the dark blue bars represent BXP's historical corporate performance levels in terms of Uniform return on assets ("ROA"). This is how we look at a company's true profits – filtering out the distortions that plague traditional accounting. 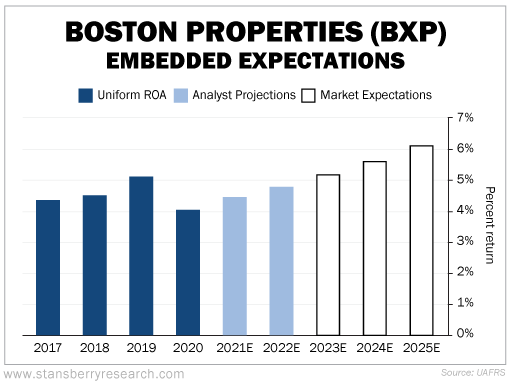 As you can see, Boston Properties is not priced to suffer. The same is true for many of its peers.

Boston Properties currently has a 4% Uniform ROA, which is reasonable for an asset-heavy REIT. Analysts who follow the company and the real estate market closely are predicting a modest Uniform ROA expansion.

Moreover, the market is pricing in Uniform ROA to continue expanding to 15-year highs.

Investors and analysts alike expect the headwinds that gripped the office-leasing business during 2020 to be just a blip in an otherwise-booming business story.

If that proves true, betting against these companies isn't a smart choice over the long term. In the meantime, however, the "At-Home Revolution" continues...

Many of the winners of the homeward shift should continue to soar as offices hold off on reopening yet again. Make sure you're still invested today.

Editor's note: Joel's open positions for the "At-Home Revolution" theme are all up double digits... with some gains as high as 183%. But while many of the pandemic's biggest winners will continue to succeed, Joel warns that others could see catastrophic losses as the country reopens. In Altimetry's Hidden Alpha, he removes companies' financial distortions to look past the accounting "noise" and see which ones are likely to thrive. To learn more – including how to gain access to Joel's top ideas right now – click here.

"Coronavirus isn't going away anytime soon," Joel wrote in November. When the first vaccines were approved, the market expected "At-Home Revolution" stocks to fall. But as we've seen, the reality has been more complicated... Learn what to expect as the recovery unfolds right here.

You never know when a crisis might upend the markets... or shake up the economy as we know it. So to prepare for financial chaos, it's important to act before the worst happens. Kim Iskyan shares five steps to protect your wealth from nasty surprises right here.