This Under-the-Radar Market Is Set to Outperform
By Chris Igou
Monday, September 30, 2019

Sure, folks in the U.S. might know about the European market. They might be aware of the opportunity in Chinese stocks. But those usually aren't the first things that come to mind for U.S. investors.

This is known as "home-country bias." It's the tendency for investors to own too much of their own country and not enough of the rest of the world.

In many cases, folks will only own stocks from their home country. And that narrow focus can cause you to miss out on amazing opportunities.

That's the case today. One under-the-radar market is breaking out to new 52-week highs. That strong trend should continue to propel it higher... But it's outside the U.S.

So you'll need to put your home-country bias aside if you plan to take advantage of today's opportunity.

One exception is a place you've certainly overlooked... the Dutch stock market. That's right. The Netherlands is one of the few markets breaking out right now.

We can see the recent breakout through the iShares MSCI Netherlands Fund (EWN). It's a broad market fund designed to track the overall Dutch market.

After a big move in August, EWN hit a new 52-week high this month. Take a look... 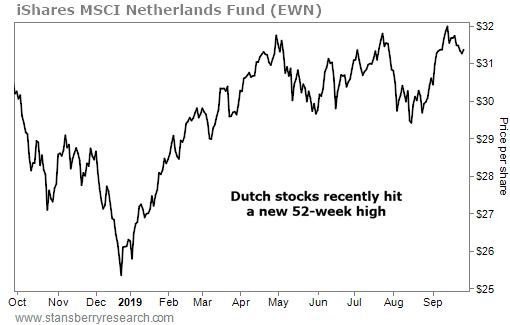 If you're like most investors, you probably haven't considered putting money to work in Dutch stocks. It's not one of Europe's major markets – but it'd be foolish for us to ignore it right now.

This market has seen a solid uptick in recent weeks. It's up 7% since bottoming in mid-August. And the recent rally drove it to a new 52-week high.

Since 2001, similar events have led to even more upside two-thirds of the time. And significant outperformance is possible from here. Check it out...

The Dutch market hasn't produced great long-term results... returning just 3% a year. You'd be much better off waiting to buy after a time like today...

Similar instances led to 4% gains in six months and a solid 8% gain over the following year.

Now, these aren't massive returns... You won't make triple digits in a short window of time. But buying the Dutch market now provides real opportunity for outperformance in an under-the-radar market.

More important, it's a chance to break your reliance on home-country bias. You'll miss out if you limit yourself to investing in only one stock market... There's more happening in the world than just the U.S.

By broadening your scope, you'll have a much better chance of finding markets that are set to outperform. And that's exactly what's possible in Dutch stocks over the next year.

"If you're an American who sticks to buying U.S. stocks, you've gotten lucky," Steve says. "But I'm certain that will change..." To find out how breaking away from home-country bias could reduce your risk going forward, read more here.

"Making contrarian investments is one of the few ways you can get an edge in the market," Chris writes. And lately, he sees double-digit upside in a hated asset overseas... Learn more here.