Bonds aren't the "usual suspects" in a Melt Up.

They're easily overlooked in normal times. And in a Melt Up – when stocks can double in short order – they're the last thing on most investors' minds.

That's why we just don't see investors flocking to buy bonds like we do with stocks these days. Bonds are too boring.

So it's no surprise bonds have been falling behind while U.S. stocks soar. They've been inching lower for months.

That downturn has accelerated in recent weeks, though. A broad basket of long-term bonds is down 11% since peaking in August 2020.

This is causing a vicious cycle... Investors are throwing in the towel after the sharp downturn. And long-term bonds are in "oversold" territory as a result.

Importantly, this means a reversal in bond prices is right around the corner. And it tells us that 2021 could actually lead to big gains in boring bonds.

If you're not familiar with the idea of an overbought and oversold asset, it's pretty simple. I'm talking about the relative strength index ("RSI").

The RSI is an easy way to see when an investment is moving too far, too fast in one direction. When this indicator hits certain levels, it often signals a coming snapback in the other direction.

For example, if bond prices fall below an RSI of 30 – hitting oversold levels – a rally is likely to follow.

Bond prices have fallen way below this mark, though. We can see this through the iShares 20+ Year Treasury Bond Fund (TLT). It holds a broad basket of long-term bonds. Take a look... 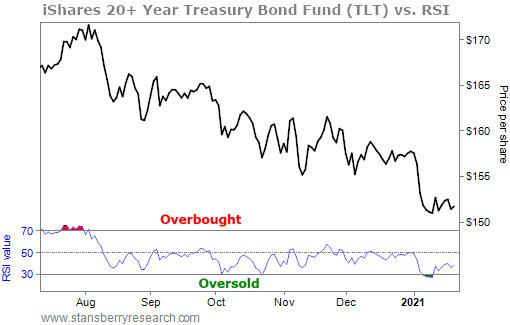 TLT's RSI fell to 26.5 just two weeks ago. That's well below the normal oversold threshold of 30. And it means investors have given up.

This is also a key figure. When TLT's RSI falls below and rises back above these levels, major outperformance is likely in the coming months. Check it out...

Normally, bonds offer much less upside potential than stocks. That makes sense, since they're also much lower-risk.

We can see that in the long-term annual average of 3% since 1990. Meanwhile, stocks average about a 7% annualized gain over a similar period.

You can do much better in bonds when the time is right, though. Buying after an oversold level like today's can actually lead to stock-like returns...

Similar cases have led to 2% gains in three months, 5% gains in six months, and a 7% gain over the next year. That's a pretty sexy return for a "boring" bond fund. And it's much more competitive with the red-hot stock market.

These returns aren't crazy high. But they're better than almost anyone would expect from boring long-term bonds in 2021. And it means you should consider shares of TLT now to take advantage of it.

With interest rates near historic lows, bonds haven't been the usual safe haven that they normally are. But that doesn't mean you can't make money with them. If you know what to look for, bonds can still be both safe and profitable... Read more here: The Government Doesn't Have Your Back as an Investor.

The herd has been saying recently that bonds are a bad idea. And when traders are crowding into one side of a bet, it often goes the opposite way. Right now, history shows that could lead to double-digit gains... Get the full story here: This 'Fool's Bet' Could Lead to Double-Digit Gains, Starting Now.