Its days of 50%-plus growth are likely behind it...

But its days of producing massive amounts of cash are not.

Over the last 12 months, it generated more free cash flow ("FCF") than any other company in the world, nearly by a factor of two.

We're talking about the third-largest company in the world – consumer-electronics giant Apple (AAPL).

Today, we'll explain why Apple still represents a great opportunity for traders... even though the company isn't growing like it used to.

And just as important, we'll talk about why you should never ignore a cash-gushing business.

Most investors are probably familiar with Apple's business. The $940 billion behemoth – behind only Microsoft (MSFT) at $1.1 trillion and Amazon (AMZN) at $980 billion – makes some of the most popular devices in the world, like the iPhone, iPad, and Apple Watch.

This isn't spectacular growth. But for a mature company, it's good. And Apple's finances are in great shape...

The company holds enough cash to pay off all its debt and have $113 billion left over. Not to mention Apple generated $60 billion in FCF over the past 12 months, which is up 9% from the prior 12 months.

That's one of Apple's secrets. It's a cash-generating machine...

For comparison, Microsoft and Amazon generated $38 billion and $21 billion in FCF, respectively, over the past 12 months. On this front, they're not even close.

And free cash flow is extremely important for both a company and its shareholders...

FCF is the cash a company earns minus its capital expenditures. This is money the company can invest or return to shareholders in the form of dividends and share buybacks.

Apple currently pays a 1.5% dividend, which is more than what Microsoft and Amazon pay. And over the past five years, Apple has grown its dividend an average of 11% per year.

Apple is buying back its stock, too. Over the past five years, it has decreased its share count by 24%, which makes each remaining share 31% more valuable.

A lot of folks say that buybacks aren't good for shareholders. And that's true when a stock is expensive... But Apple has been getting a great deal. You see, its shares are cheap...

For example, take a look at Apple's EV/EBITDA (its enterprise value divided by earnings before interest, taxes, depreciation, and amortization). This is a common way to measure value. And you can see how it compares in the table below... 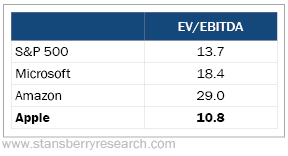 Does Apple deserve to trade at such a low valuation relative to these other businesses? Well, it's not growing as quickly. But it will take Microsoft and Amazon years before they're producing as much cash as Apple.

Cash is valuable today. And investors aren't giving Apple enough credit for the potential of its FCF.

It can use this money to grow its business or invest in its shareholders. That's powerful.

And perhaps most importantly, while a company can use creative accounting to make its earnings look better than they are... you can't fake cash. That's why we like to call FCF "the number that doesn't lie."

Apple hasn't "wowed" investors with any new world-changing consumer products lately. And it looks a lot more like a mature business than the exciting growth story of years past. For those reasons, investors put a low valuation on Apple's stock.

But because they're looking in from the outside, investors are often blind to a company's potential. Cash is potential... And Apple generates more of it than any other company.

It may take a little time for the value of Apple's cash to show itself. But don't underestimate one of the world's best businesses.

Editor's note: Ben and Drew recently sent out a new recommendation to their DailyWealth Trader readers. It's a way to profit from technology stocks as this bull market charges on... with huge upside potential over the next 12-18 months. To learn how to access this recommendation – and all their daily research – with a risk-free trial, click here.

Most investors spook easily – and they ignore what's really important. Recently, Ben and Drew shared another important idea that investors tend to overlook... Read more here: One of the Biggest Misconceptions in the Stock Market.

"Amazon is the hot story," Chris Igou says. "But the reality is that Amazon isn't the world's largest retailer." This business isn't flashy, but it could be setting up for a double-digit rally in the months ahead. Learn more here.