The Powerful Market Force You Must Understand
By Chris Igou
Monday, November 15, 2021

One powerful market force can help you answer an age-old question...

Should I keep my money invested at home in the U.S., or should I go overseas to seek better gains?

Specifically, this force looks at two markets. And it has been extremely good at picking the best performer between these two asset classes over the past several decades.

Knowing how to read this market force correctly is critical... It can mean the difference between making hundreds-of-percent gains or losing money.

Even better, if you see it happening in real time, you can make big gains by putting your money to work in the market that's likely to outperform.

We can see this market force at work in one of the best periods to own U.S. stocks in history...

Congratulations! You've done really well... The S&P 500 Index soared about 70% in roughly nine months through the end of 2020. That's a massive return for an index that averages 7% per year over the long run.

Pinpointing a bottom like that is incredibly difficult. And any investor who can say they did deserves a victory lap.

But while buying into the S&P 500 back then was a great call... it wasn't the best one.

U.S. stocks weren't the best performer during that nine-month period. Emerging markets beat out the S&P 500... The MSCI Emerging Markets Index returned 74% over the same span.

That's right – despite the tremendous rally, buying U.S. stocks at the 2020 bottom wasn't the best way to position your money for the rest of the year. Emerging market stocks fared even better.

Our powerful market force explains why. Put simply, last year, this force was moving in a direction that helps emerging market stocks...

In case you haven't figured it out by now, I'm talking about the U.S. dollar.

Around when the markets bottomed in March 2020, the U.S. dollar started declining...

The Federal Reserve pumped trillions of dollars into the U.S. economy in early 2020. That meant more dollars were floating around in circulation. And with more dollars in the system, each dollar should be worth less on a relative scale.

That's why the U.S. dollar's value dropped for most of 2020. You can see what I mean in the following chart. It shows the U.S. Dollar Index from March 2020 through the end of the year... 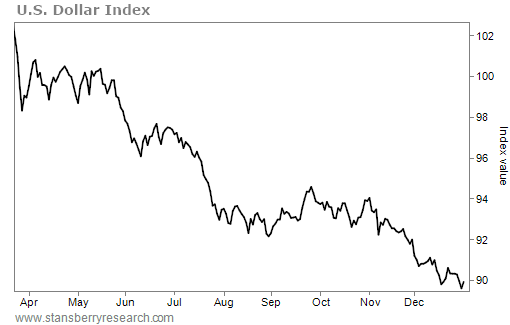 The U.S. Dollar Index fell from 102 to 89 in nine months. That might not seem like a huge move, but a double-digit percentage drop in a global currency is a big deal – especially in such a short span.

On the flip side, the move was great for emerging markets. Here's why...

Emerging market companies typically borrow in U.S. dollars. In other words, their debt is usually denominated in U.S. currency. So when the U.S. dollar's value declines, these companies have an easier time borrowing... And the debt that they already have on the books falls as well.

This is great news for companies in emerging markets. The businesses they run get better as the U.S. dollar falls.

The opposite is also true... When the dollar rises, U.S. stocks tend to crush emerging market stocks. Let's look at the late 1990s as an example of how that side of the trade can play out...

From 1995 through 2000, the U.S. dollar was in a rapid uptrend. It was strengthening alongside the U.S. economy. You definitely wanted to own U.S. stocks back then...

Again, if the trend in the dollar is up, U.S. stocks typically outperform emerging market stocks. That's what we saw in the late 1990s.

This powerful market force explains why U.S. stocks weren't the biggest winner coming out of the COVID-19 bust. Tomorrow, I'll share what it says you should own right now...

"Most investors give in when times get tough," Chris says. Folks are leaving this market for dead today. And we could see major potential upside over the next year as a result... Get the full story here: Investors Are Losing Confidence in One Country's Raging Bull Market.

"Every once in a while, you can catch a beaten-down market and safely make short-term gains," Chris writes. We're seeing this opportunity in a group of stocks today. And it could mean a quick jump higher over the next three months... Read more here: This Market Crashed... Now It's Ready for a Big Short-Term Jump.