Another Reason to Be Bullish on Hong Kong
By Chris Igou
Monday, August 19, 2019

We just came out of the tenth week of protests in Hong Kong...

In June, a proposed extradition bill created massive backlash. The bill would have allowed the extradition of criminals in Hong Kong to China. But the bill was dead on arrival...

In fact, the proposition alone led to weeks of rioting. This, alongside a deepening trade war with the U.S., has put Hong Kong's future stability into question.

But let me be clear... While the long-term picture is uncertain, we are seeing a short-term opportunity to buy a beaten-down market.

Hong Kong stocks recently fell for nine consecutive days... a rare event. And history says this dramatic fall could lead to 20%-plus gains in Hong Kong stocks from here.

Our Asia-based analyst Brian Tycangco gave his "boots on the ground" report from Hong Kong in DailyWealth last week.

He believes that while the riots are a concern in the short term, they're likely creating a big opportunity in the long term... And history agrees.

Like I said, Hong Kong stocks recently fell for nine straight days. It's been a bit of a bloodbath, with the entire market falling double digits in just a few weeks. Take a look... 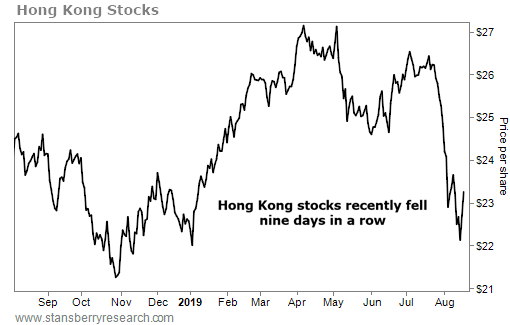 This is normally not a good sign. After all, a stock that's trending up often continues to reach higher highs in the short term. And a falling stock is likely to make even lower lows.

But history says that's not the case in Hong Kong... It's the opposite. This string of losses is actually creating a buying opportunity.

Since 1996, similar occurrences led to winning trades in Hong Kong stocks 93% of the time over the next year. And the outperformance that followed is darn impressive. Take a look...

Similar cases led to 5% gains in three months, 12% gains in six months, and a massive 21% gain over the next year. That's staggering compared to a simple buy-and-hold strategy. But this is what's possible right now, according to decades of history.

I get the concern we're seeing from investors today... The situation in Hong Kong isn't pretty. And things can always get worse before they get better. But they don't necessarily have to.

This rare event has set up a buying opportunity in the short term. And you can easily take advantage of it with the iShares MSCI Hong Kong Fund (EWH), which holds a broad basket of Hong Kong stocks.

To be safe, it's best to wait for the uptrend to return in EWH before buying. History says that should happen soon... And a 21% gain is possible over the next year.

Catch up on Brian's firsthand account on the situation in Hong Kong – and the potential ahead for investors – here: The Hong Kong Protests Will Give Way to Opportunity.

"You can see why it's easy to develop a bias against the world's second-largest economy," Brian writes. "The problem is, bias against China could be costing you a lot of money." Investors who are only thinking about the U.S. are missing out... but you don't have to be one of them. Learn more here.