This is one of the most important asset prices. Yet, few investors pay it any mind.

When it rises, it can crush huge parts of the market. And when it falls, those areas can soar.

So while few people focus on it as an investment, it's crucial to know where it's headed.

Right now, we have a good idea of where its next move might be. That's because speculators are all betting on its rise. And history tells us the crowd will likely be wrong.

Today, I'll share exactly why... and more important, what it means for you as an investor.

This asset might seem trivial when you hear its name. But again, its movements are crucial for investor returns.

I'm talking about the U.S. dollar.

After a fall early this year, the dollar has been moving higher since its bottom in May. It went from below 90 to around 94 in just five months. That may not seem like an impressive move... But for a slow-moving currency, it's a big change in trend.

However, this quick turnaround could run into trouble soon. That's because the dollar rally hasn't gone unnoticed.

Futures traders are more bullish on the dollar than they've been in years. And no matter how good an investment is, you want to avoid it if investors fall in love with it.

That's because when investors are "all in" on a trade, there's likely little upside potential left.

We are nearing that maximum "love point" with the dollar right now. And we can see this through the Commitment of Traders ("COT") report for the dollar...

The COT report tracks what futures traders are doing with their money in real time. And it's a great contrarian tool at extremes.

When futures traders are all betting in one direction, the opposite is likely to occur. Today, these traders are the most bullish they've been since 2019. Check it out... 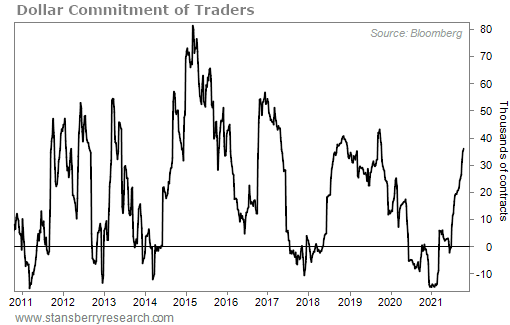 You can see the surge in bullish bets in the chart above. Futures traders are giddy about the rise in the dollar... And they're jumping on board.

In June 2012, futures bets on a climbing dollar were at a multiyear high. Then, the dollar fell from around 82 to below 79 in less than three months. The bullishness faded as prices dropped, too.

This happened again in 2013. After bullish futures bets were piling up in March 2013, the dollar fell from 83 to near 79 by October. It was a six-and-a-half-month downturn.

The last two examples yielded similar results. In 2015 and 2016, traders were chasing the dollar higher. Once bullish bets were at extremes, both cases led to a devalued dollar in the short term.

Today, we aren't quite at the levels we've seen in the past. So futures traders can get more bullish from here. But with bullish bets at multiyear highs, a dollar decline is likely.

What does it mean for investors? Well, a falling dollar is a headwind for U.S. stocks. But if you own foreign stocks, especially emerging markets, history tells us a falling dollar could lead to gains.

Those are the areas you'll want to focus on if the dollar turns over and begins a multi-month move lower.

"Most investors give in when times get tough," Chris says. Right now, folks are leaving this market for dead. And that could mean major potential upside over the next year... Read more here: Investors Are Losing Confidence in One Country's Raging Bull Market.

"When the entire crowd is making the same bet, it's smart to do the opposite," Chris writes. Investors are fleeing this commodity in droves. But history says we could see a huge surge higher in the near future... Get the full story here: This Beaten-Down Commodity Is About to Soar.