Why Investors Will Profit From the Great Resignation
By Sean Michael Cummings
Monday, April 11, 2022

The Great Resignation is not what the financial media thinks it is.

In my last job, I was a contractor working under a director and middle-manager. At one meeting, my manager asked a tough question about the team's safety.

I couldn't believe the director's response...

Then, he looked pointedly at me and my colleagues. "Soon enough, they'll be replaced with more bugs."

My manager nodded along. I resigned that week.

Soon after that, I found my position at Stansberry Research. Not only is my work life richer – my wallet is too.

Stories like mine have been playing out across the country. They've been met with outrage from business owners... and worried headlines from the media.

But this is leading to a bullish new development in the American economy. If it continues, it will fuel a boom in working-class incomes. Purchasing power will surge. And that's great news for stocks...

If you think you've noticed more "Help Wanted" signs around – you're right.

According to a recent poll by Microsoft, 43% of employees are likely to consider changing jobs this year. And they've got plenty of jobs to choose from.

Openings skyrocketed 139% from their low in April 2020 to February of this year. At the same time, job quits have soared... They're up 113% over the same period.

These two figures create a staggering image. It might seem like the economy is being held hostage by laborers who refuse to work... and that the American labor force is throwing in the towel right when we need them the most.

But folks are overlooking an important piece of this puzzle.

Let's revisit the job quits figure. This time, we'll focus on professional and business jobs only. Take a look at what happened after the initial recession of 2020 (marked in gray)... 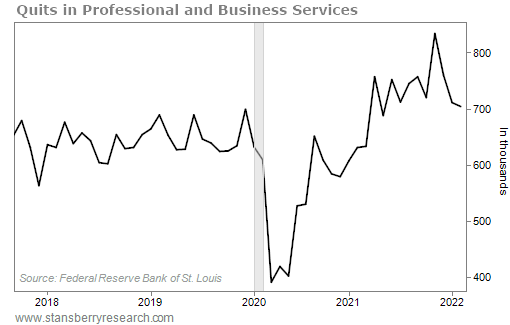 Starting in March 2020, professionals left jobs in droves. Quits soared 113% to their peak near the end of last year. That's on par with the increase we've seen for the rest of the workforce – except for one thing...

By February, the number of quits for white-collar workers dipped back in line with the historical average.

The Great Resignation is already ending. At least, it is for the professional class.

The remaining quits are happening in manufacturing, hospitality, retail, travel, and food services... the same industries that downsized the most during the pandemic.

And according to the Federal Reserve Bank of San Francisco, this kind of "reshuffling" in these industries has happened before...

Recently, it shared a report from economist Bart Hobijn. The findings aren't what you might think. Historically, recessions cause a spike in layoffs. A recovery follows... and the market gets a flood of job openings as businesses look to rehire.

But these openings aren't just for the unemployed. They're available to anyone seeking a better offer. So, as the report shows, we get waves of quits and new hires when the economy is in a period of fast recovery – like we saw in the decades after World War II.

The job openings were already there. The quits are a result of folks jockeying for better employment. And that puts a lot of pressure on employers at blue-collar jobs to raise wages... which is why wage growth also tends to spike during these rapid-recovery events.

Overall, wage growth spent most of last year in the double digits. Today, it's still nearly double what we saw for most of the last decade.

In other words, the Great Resignation isn't leaving a stagnant workforce. It's Americans finding better jobs for better pay.

That shouldn't scare you. In fact, it's a bullish development.

The San Francisco Fed predicts this trend could continue through the end of this year. If it does, it will raise household incomes across the country. Workers and families will get a big boost in buying power.

That's a strong tailwind for the economy... And a strong economy is a win for investors.

"Financial empowerment is ready to give way to renewed spending," Dr. David "Doc" Eifrig writes. Many folks are transitioning to higher-paying jobs as wages increase. And their eagerness to spend as the world reopens gives us an opportunity to profit... Learn more here: Americans Are Ready to Go Back Into Debt.

"This tight job market is likely a good sign for the economy," Doc says. Right now, companies are offering higher wages than we've seen in the past. And when Americans have more money to spend, it's hard to bet against the stock market... Read more here.