Thanks to the Federal Reserve, gold has a huge tailwind at its back, starting now.

The Federal Reserve just cut interest rates for the first time in eight years. And contrary to recent hints from the head of the central bank, I believe more rate cuts are likely.

I know what you're thinking... Sure, a rate cut is great for stocks, at least in the short term. But why would it mean good things for gold?

Let me explain, starting with some of the background on this crazy situation...

Until recently, the Fed had been raising interest rates. Its reasons were sound...

Unemployment has been at record lows. And the economy is in good shape. So the Fed spent 2017 and 2018 pushing rates higher.

So, based on history, rising interest rates are about the worst thing that can happen to gold. Just take a look at the chart below to see what I mean... 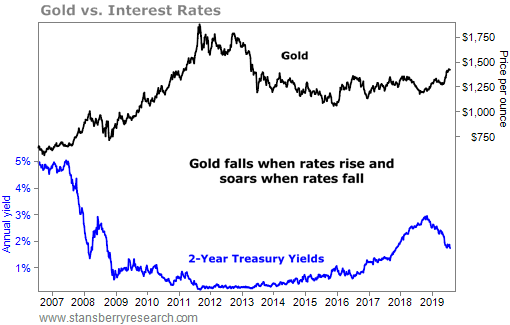 This chart shows the yield on two-year Treasury bonds. These aren't the same rates that the Fed controls directly... But they're close. They're partly market-driven and partly driven by the Fed.

From 2007 to 2011, interest rates fell dramatically... and gold soared. Then interest rates leveled off in 2011, the same year gold peaked. The interest rate on the two-year Treasury bond started a steady rise from 2012 to 2018. And gold continued lower.

But that all changed this year...

Recently, two-year rates have been falling again. Sure enough, gold has been rising. And that trend should continue... because last week, the Fed completely changed course.

Despite a strong economy and low unemployment, the Fed cut rates by 0.25%. That's a huge positive for gold. Prices jumped 2% on Thursday after the Fed's big announcement.

Again, gold pays no interest... So the opportunity cost of owning gold gets worse as rates rise. And when rates fall, the opposite is true.

That's exactly what we've been seeing lately. More folks want to own the metal. They know they're not giving up much in interest by putting their money in gold.

This is huge news. It helps to explain why the metal has been soaring. And it tells us the rally should continue for a deeply ingrained, fundamental reason.

In short, gold's recent breakout isn't overblown. There's still plenty of upside left, thanks to the Fed's decision... And gold could rally much higher from here.

Stocks tend to soar when the Fed cuts rates, especially after a cycle of hikes. But a few specific sectors have significantly outperformed... Learn more here: The Big Winners When the Fed Cuts Rates.

"Money flows to where it's treated best," Steve writes. That's true across asset classes. And it's one reason he says we'll see a "virtuous cycle" of investment dollars flooding into the U.S... Read the full story here.